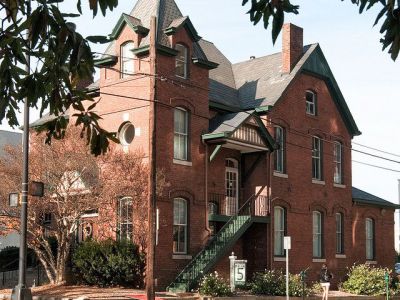 The Bagley-Mullen House is a majestic brick mansion located at Poplar and 5th Streets in Charlotte. It was built by Edward Andrews, who was somewhat known for erected impressive homes in the city.

The home is the only example of French Chateauesque architecture in the city. The Revivalist architecture of the house was inspired by Loire Valley chateaux. It is reminiscent of such august residences as Meillant and Courtalain.

The original occupant of the house was Andrew Bagley who quickly sold the house to Hornet's Nest Liniment inventor Walter Mullen. Today, the house is the location of a tattoo parlor. Prior to this it functioned as a day spa. The historic building remains intact for anyone who wants to stop by and see the beautiful architecture.

The Bagley-Mullen House is located within easy walking distance of Discovery Place, St. Peter's Episcopal Church and a large number of historic buildings in the Fourth Ward.
Image by Steve Minor on Flickr under Creative Commons License.