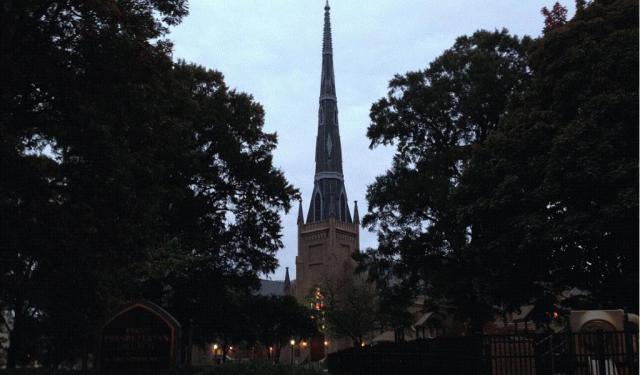 Charlotte is home to a variety of religious buildings, representing a range of religious denominations. Some of the buildings date back to 19th century and are quite beautiful. Take this self-guided tour to see some of Charlotte's most historical places of worship!
Image Courtesy of Wikimedia and Dmadeo.
How it works: Download the app "GPSmyCity: Walks in 1K+ Cities" from iTunes App Store or Google Play to your mobile phone or tablet. The app turns your mobile device into a personal tour guide and its built-in GPS navigation functions guide you from one tour stop to next. The app works offline, so no data plan is needed when traveling abroad.

A prominent feature of the church interior was a triptych by American painter Ben Long, a three-part fresco depicting Christ’s Agony in the Garden, Resurrection, and Pentecost. The fresco was severely damaged in February 2002 and cannot be fully restored. Following the damage to the fresco, the interior of the Church was renovated in 2007.

Image Courtesy of Flickr and Steve Minor.
Sight description based on Wikipedia.
2

First Presbyterian Church is a historic Presbyterian church located in Charlotte. It was built in 1857, and is a one-story, Gothic Revival style stuccoed brick building. The original spire was rebuilt in 1883-1884 and the side and rear walls of the church were taken down and a new structure was erected in 1894–1895.

It was added to the National Register of Historic Places in 1982.

Image Courtesy of Wikimedia and Dmadeo.
Sight description based on Wikipedia.
3

St. Peter's Episcopal Church is located in Charlotte's Historic Fourth Ward near Discovery Place. It is an excellent place to stop to admire the art and architecture of the building while on a walking tour of the city.

St. Peter's was the first Episcopal Church in the city. Though established as a church in 1834, it wasn't recognized as a parish in the Diocese of North Carolina until a decade later. The church building was finished more than 50 years after this recognition.

Construction of the church began in 1893 under the direction of Bishop Joseph Blount Cheshire, Jr. It was completed in 1895, and then expanded in 1912 to add the Parish House and chapel. Renovations and more additions have taken place over the years with the most recent being in 2010.

The church building is open daily to allow visitors and residents a place of sanctuary. Visitors are also welcome to attend church services on Sundays.
Image Courtesy of Flickr and JasonTromm.
4

First United Methodist Church is located between 8th and 9th Streets on North Tryon Street in the heart of Charlotte's historic Fourth Ward district. The church was founded in 1927 and has a weekly worship service, bell choir, children's dinner and a variety of religious programs.
Image Courtesy of Flickr and Chris Lin.
5

Dating back to 1869, First United Presbyterian Church is located on the corner of Seventh and College Streets near the Levine Museum of the New South. This historic church was built in 1894 by the church members themselves, working in the evenings and on weekends. Today it is one of the most notable places of worship in the city.
Image Courtesy of Flickr and Chris Lin.