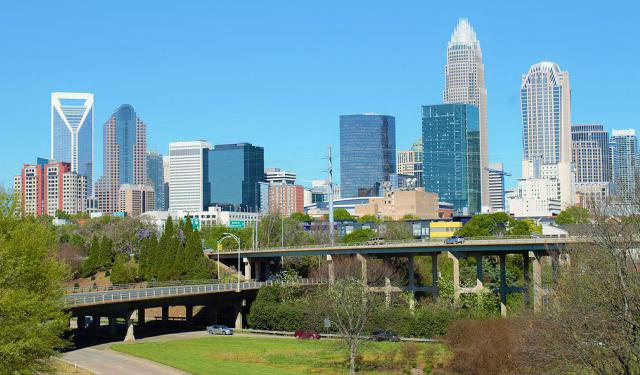 Another nickname of Charlotte is "The Hornet's Nest," which originated during the American Revolutionary War when General Charles Cornwallis was driven out of the occupied city and referred to the area as "a hornet's nest of rebellion." That badge continues to be worn with honor today as evidenced by the Charlotte Hornets, the state's professional basketball team.

Europeans were not the first residents of the Charlotte area. The Catawba were recorded in the region as early as 1567. There were some 10,000 Catawba in the area in the mid-1700s, but the numbers dwindled to just over 100 only a century later. This was largely due to warfare and disease brought by Europeans.

Charlotte has greatly grown and changed over the years. Once the site of the nation's first gold rush, the city is now a center of finance. It has also become an important in the energy sector and as a major sports hub. The NASCAR Hall of Fame is located in Charlotte, as are the Charlotte Hornets, Carolina Panthers and Charlotte FC.

Visitors to Charlotte can will find it easy to get around on foot as the city is ranked as one of the most walkable in the country. Museums like the Levine Museum of the New South and Discovery Place are just some of the city's must-see spots.

Take this self-guided tour to see for yourself what makes Charlotte a historic and meaningful place.
Image Courtesy of Wikimedia and brandon walker.
How it works: Download the app "GPSmyCity: Walks in 1K+ Cities" from iTunes App Store or Google Play to your mobile phone or tablet. The app turns your mobile device into a personal tour guide and its built-in GPS navigation functions guide you from one tour stop to next. The app works offline, so no data plan is needed when traveling abroad.

The Four Corner Sculptures were crafted in 1995 by artist Raymond Kaskey. They are said to represent transportation, commerce, industry and the future. The statues are made of bronze and granite. Weighing at about 5,000 pounds each, they occupy a permanent home at Independence Square on the corners of Tryon and Trade Streets.

Visitors to Charlotte will find themselves in the midst of a busy intersection if they try to view all four statues at once. Luckily, this pedestrian friendly city has plenty of sidewalks so that each of the statues can be individually admired.

Independence Square is an excellent place to view the architecture of downtown Charlotte. The historical landmarks of Trade and Tryon Streets are home to skyscrapers like the Bank of America Corporate Center, which is the tallest building in North Carolina. Public works of art are also located on and around the square. Some of these include "Il Grande Disco" and "Harmony," which is located in the Blumenthal Performing Arts Center plaza.

The Old Settlers' Cemetery is one of the oldest sites in Charlotte. Located in the Fourth Ward Historic District, the history of the cemetery dates to 1776 when the first grave, that of Joel Baldwin, was placed. Old Settlers' remained the only public cemetery in Charlotte through 1854, though it stayed in use through 1878 when the final citizen was laid to rest.

Among those famed North Carolina buried at Old Settlers' Cemetery is Thomas Polk, founding father of Charlotte and Continental Army Officer during the American Revolutionary War. Others interred at the cemetery include early congressmen Nathaniel Alexander, Greene Washington Caldwell and William Davidson.

Those wishing to visit Old Settlers' Cemetery will find it located adjacent to the First Presbyterian Church of Charlotte, one block north of Independence Square at Trade and Tryon Streets. Though the cemetery is within close proximity to the Presbyterian Church, the two are not connected.

Image Courtesy of Wikimedia and AlexiusHoratius.
3

Discovery Place combines science and technology with hands-on learning. This interactive museum was created for kids of all ages. Adults will love it too!

The museum was established in 1981 but its origins date to 1946 when teacher Laura Owens helped to develop the Children's Nature Center. It was so well received by the community that a planetarium was added in 1965. By the 1970s, it was one of the busiest tourist spots in Charlotte.

The current location on Tryon Street was built to accommodate the growing number of visitors as well as additions to the museum itself.

Discovery Place is located in the Historic Fourth Ward, which makes it an easy stop on walking tours. Visitors will find science, nature and kids museums as well as an IMAX theatre. Interactive exhibits include an indoor rainforest, a hands-on human health and anatomy lab, an area focused on building everything from castles to pillow forts and many others.
Image Courtesy of Wikimedia and Ken Thomas.
4

St. Peter's Episcopal Church is located in Charlotte's Historic Fourth Ward near Discovery Place. It is an excellent place to stop to admire the art and architecture of the building while on a walking tour of the city.

St. Peter's was the first Episcopal Church in the city. Though established as a church in 1834, it wasn't recognized as a parish in the Diocese of North Carolina until a decade later. The church building was finished more than 50 years after this recognition.

Construction of the church began in 1893 under the direction of Bishop Joseph Blount Cheshire, Jr. It was completed in 1895, and then expanded in 1912 to add the Parish House and chapel. Renovations and more additions have taken place over the years with the most recent being in 2010.

The church building is open daily to allow visitors and residents a place of sanctuary. Visitors are also welcome to attend church services on Sundays.
Image Courtesy of Flickr and JasonTromm.
5

5) Levine Museum of the New South (must see)

Post-Civil War life in Charlotte, North Carolina is on full display at the Levine Museum of the New South. Visitors will find permanent and revolving exhibits that detail the changes in the region from the US Civil War through present day. The museum was founded in 1991 and has been an important attraction since that time.

Exhibits at the Levine Museum are interactive in order to immerse visitors into life of the locals from days gone by. The permanent exhibit is called "Cotton Fields to Skyscrapers." This exhibit includes stories from Reconstruction, industrialization and the Civil Rights Era. This 8,000 square foot exhibit space includes music, video, oral histories and artifacts from throughout the years. It includes a rebuilt, one-room tenant farmer's house, Good Samaritans Hospital Chapel and reconstructions of main street Charlotte and lunch counters where sit-ins were staged.

Temporary exhibits often focus on specific areas in Charlotte. One of these is Brooklyn, the take of a historic black community in the city. This exhibit shows visitors the opportunity gaps created by urban renewal while also celebrating the rich culture of the neighborhood.

The Equal Justice Initiative has worked with the Levine Museum of the New South on an exhibit titles "It Happened Here: Lynching and Remembrance." The exhibit reminds museum patrons of lynchings throughout the country, with a strong focus on two that took place in Mecklenburg County.

The Levine Museum of the New South is located in Charlotte's Second Ward. It is about one block south from Discovery Place and a short distance from the NASCAR Hall of Fame.

Why You Should Visit
- To learn about the history of Charlotte residents
- To take a walk back through time, from Reconstruction through Civil Rights

The museum is open Monday and Friday from 10 AM to 5 PM, Saturday from 10 AM to 4 PM and Sunday from noon through 5 PM. It is closed on national holidays.
Image Courtesy of Wikimedia and James Willamor.
6

The Green is a pocket park on 1.5 acres near the Charlotte Convention Center. This park is a fun stop on a walking tour of the city's Second Ward.

The Green is notable for its focus on art. Temporary, public art is often on display, particularly in the summer. A number of permanent pieces can be seen throughout the year. With a focus on world literature, The Green offers bronze statues that feature great novels like Roots, Don Quixote and Wuthering Heights.

There are many other public works of art in and near the Green. The Brick Kids - Life is an Open Book features children, made from brick, climbing a brick wall. The Firebird is an 18 foot structure featuring a bird adorned in shards of glass. It is adoringly called "Disco Chicken" by locals. The park also features three fountains shaped like fish that spit water from their mouths during the summer months.

Those visiting Charlotte in the summer may find themselves enjoying performances at the Green during the Charlotte Shakespeare Festival. Other public events, including movie screenings and free outdoor plays, often take place in this park.
Image Courtesy of Flickr and David Berkowitz.
7

A prominent feature of the church interior was a triptych by American painter Ben Long, a three-part fresco depicting Christ’s Agony in the Garden, Resurrection, and Pentecost. The fresco was severely damaged in February 2002 and cannot be fully restored. Following the damage to the fresco, the interior of the Church was renovated in 2007.
Image Courtesy of Flickr and Steve Minor.
Sight description based on Wikipedia.
8

Visitors to Charlotte will almost certainly find themselves at Latta Arcade. This indoor shopping area is two floors of shopping and restaurants with large windows and a massive glass skylight.

Latta Arcade was constructed in 1914 by architect William H. Peeps. It was the brainchild of Edward Dilworth Latta, an area retailer and real estate magnate. His idea was to have a first floor retail area that would be attractive to visitors and shop owners. His offices, Charlotte Consolidated Construction Company, were located on the second floor.

Visitors continue to enjoy Latta Arcade, thanks to the welcoming space, period architecture and easy availability of local shops and dining. They can try everything from pizza to salad to all-day breakfast and authentic Indian cuisine.

It was added to the National Register of Historic Places in 1975. Early risers will appreciate the availability of Latta Arcade. It is open Monday through Friday from 7 AM through 6 PM.
Image Courtesy of Flickr and Steve Minor.