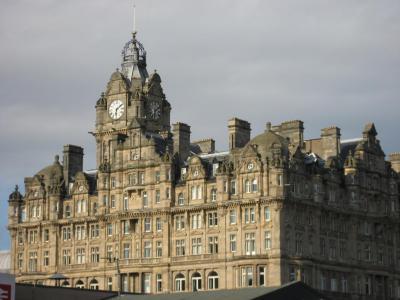 The Balmoral, originally built as the North British (Railway Station) Hotel, is a luxury five-star property and landmark in Edinburgh. It is located in the heart of the city at the east end of Princes Street, the main shopping street beneath the Edinburgh Castle rock, and the southern edge of the New Town.

Since 1902, the hotel's clock has been set three minutes fast to ensure that the people of Edinburgh wouldn't miss their trains. This is still the case today. The only day that the clock runs on time is on 31 December (Hogmanay) for the city's New Year celebrations. The clock tower, at 190 feet (58 m) high, forms a prominent landmark in Edinburgh's city centre.

In February 2007 it was confirmed that author J. K. Rowling finished the Harry Potter series, Harry Potter and the Deathly Hallows at this hotel. Rowling left a signed statement written on a marble bust of Hermes in her room saying: "J.K. Rowling finished writing Harry Potter and the Deathly Hallows in this room (552) on 11th Jan 2007". The room has since been renamed the "J.K. Rowling Suite," and the marble bust has been placed in a glass display case to protect it. The suite, priced at nearly £1,000 per night, is a pilgrimage site for Harry Potter fans.
Image by Morgan Johnston on Wikimedia under Creative Commons License.
Sight description based on wikipedia