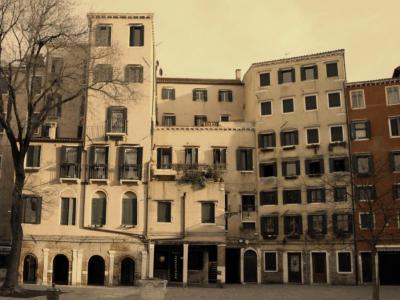 In middle-age Europe, very few businesses were open to Jewish, money-lending being one of them. This is because the Christian Church considered it a sin to lend money at interest so Christians were forbidden to engage in this business. Jews filled the vacuum by offering cash loans to people.

There were originally three banks in Venice which were coded by color: red, green and black. They were, in fact, a hybrid of bank and pawnshop. Quite possibly the world's oldest pawnshops, they stayed in business until the end of the Republic (1797). Their commercial activities were documented in William Shakespeare's play "The Merchant of Venice".

Today you can visit one of these banks, the Red Bank (Banco Roso), which has been restored and is open to visitors. Its name is derived from the red receipt that customers received when pawning an item. The name leads some people to speculate that the term "in the red", was originally derived from this old Venetian pawnbroker.
Image Courtesy of Wikimedia and Kodaly.