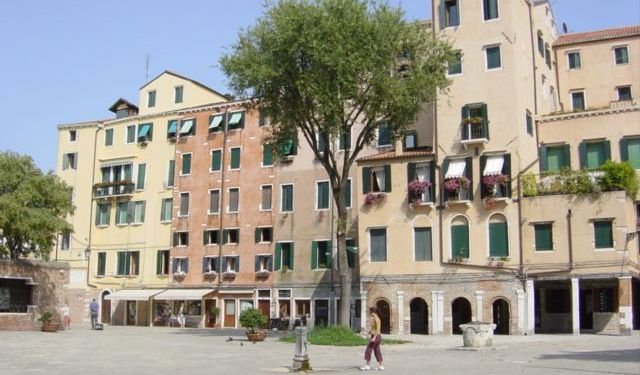 Image by Giovanni Dall'Orto on Wikimedia under Creative Commons License.

Founded in 1516, the Jewish Ghetto in Venice was the oldest of its kind in Europe. At the time, Venice received order from the Pope to expel all Jews from the city, but the Venetian government opted to lock them onto a small island in the district of Cannaregio. Since then this small area has been the center of Jewish life in Venice, comprising several synagogues (divided by ethnicity) and homes for about 1,000 Jews. Take this self-guided walk to witness Jewish life in Europe's oldest ghetto.

Getting to Sight #1. The first tour stop (Entrance to the Old Jewish Ghetto) can be reached by: Alilaguna Water Taxi: Arancio (A), Water Bus: 4.1, 4.2, 5.1, 5.2.
How it works: Download the app "GPSmyCity: Walks in 1K+ Cities" from iTunes App Store or Google Play to your mobile phone or tablet. The app turns your mobile device into a personal tour guide and its built-in GPS navigation functions guide you from one tour stop to next. The app works offline, so no data plan is needed when traveling abroad.

1) Entrance to the Old Jewish Ghetto

This is the main entrance to the Old Jewish Ghetto in Venice. Following the decree of March 29, 1516, guarded gates were placed at entrances to the Ghetto, that were closed after dark to prevent the Jews from going out. Some often paid money to be able to sneak out during the hours of prohibition. This situation persisted until the arrival of Napoleon and the French army in 1796 when these "gates of infamy" were finally torn down and burnt.
Image by Daniel Ventura on Wikimedia under Creative Commons License.
2

The Spanish Synagogue is one of the two synagogues still functioning in the Jewish Ghetto of Venice; open for services from Passover until the end of the High Holiday season. It was founded by Jews expelled from the Iberian peninsula in the 1490s who reached Venice, usually via Amsterdam, Livorno or Ferrara, in the 1550s.

The four-story yellow stone building was constructed in 1580 and was restored in 1635. It is a clandestine synagogue, which was tolerated on the condition that it be concealed within a building that gives no appearance being a house of worship form the exterior. The interior, on the other hand, is elaborately decorated.

Image by Didier Descouens on Wikimedia under Creative Commons License.
3

Middle Eastern Jews had lived in Venice for a long time and they formed a community of more than 600 people prosperous enough to build this beautiful building in 1541, housing a synagogue on the 2nd floor. The building was restored in the late 17th century and is an active place of worship.
Image by Abxbay on Wikimedia under Creative Commons License.
4

Built in 1575, the Italian Synagogue is the smallest and simplest of all Venetian synagogues, as Italian Jews were the poorest among different ethnic groups. Occupying the 3rd floor of the building, it barely has enough room for 25 people.
Image by Didier Descouens on Wikimedia under Creative Commons License.
5

In middle-age Europe, very few businesses were open to Jewish, money-lending being one of them. This is because the Christian Church considered it a sin to lend money at interest so Christians were forbidden to engage in this business. Jews filled the vacuum by offering cash loans to people.

There were originally three banks in Venice which were coded by color: red, green and black. They were, in fact, a hybrid of bank and pawnshop. Quite possibly the world's oldest pawnshops, they stayed in business until the end of the Republic (1797). Their commercial activities were documented in William Shakespeare's play "The Merchant of Venice".

Today you can visit one of these banks, the Red Bank (Banco Roso), which has been restored and is open to visitors. Its name is derived from the red receipt that customers received when pawning an item. The name leads some people to speculate that the term "in the red", was originally derived from this old Venetian pawnbroker.

Image by Kodaly on Wikimedia under Creative Commons License.
6

6) Entrance to the New Jewish Ghetto

The Ghetto is an area of the Cannaregio sestiere of Venice, divided into the Ghetto Nuovo ("New Ghetto"), and the adjacent Ghetto Vecchio ("Old Ghetto"). These names of the ghetto sections are misleading, as they refer to an older and newer site at the time of their use by the foundries: in terms of Jewish residence, the Ghetto Nuovo is actually older than the Ghetto Vecchio. The ghetto was connected to the rest of the city by two bridges that were only open during the day. This is the main entrance to the New Jewish Ghetto.
Image by Dimitris Kamaras on Flickr under Creative Commons License.
Sight description based on wikipedia
7

The German Synagogue was built in 1528, the oldest among all Venetian synagogues. It is located on the top floor of a building which itself is hardly noticeable among the other buildings. The interior has walls decorated in marble and the Ten Commandments inscribed in gold letters against a red background that runs along the entire perimeter of the worship hall.
Image by Michele.V on Wikimedia under Creative Commons License.
8

The Canton Synagogue is recognizable by the tiny wooden room with a small, rounded turret on its top. This is the 2nd synagogue in Venice to be built with the financial support from Germans, French, and Swiss Jews. It was renovated in the 18th century, so its decorations are reflective of the Baroque era.
Image by Ladislav Faigl on Wikimedia under Creative Commons License.
9

Sitting in the middle of the old Jewish Ghetto, between the two ancient Jewish synagogues, the Jewish Museum of Venice was founded in 1953 by the Jewish Community of Venice. Its exhibition shows the Jewish community's life between the 16th and 20th centuries.

The first room of the museum is dedicated to silverwares reminding the most important Jewish festivities starting from Shabbat. The second room is mostly dedicated to traditional Jewish textile manufacture. One can find different examples of Meil and other precious coverings used to decorate the Torah, but also beautiful examples of Parokhet – curtains to cover the doors of 'Aron Ha Kodesh.

During WWII, when Venice was occupied by Nazis, they asked the head of the local Jewish community, Giuseppe Jona, to bring a list of all Jews living in Venice to the Nazi headquarters. A well-respected physician, Giuseppe Jona had the list, but instead of turning it over to Nazis, he burned it and took his own life.

Because of his sacrifice, the Nazis were not able to locate the Venetian Jews, and so only 243 of them were rounded up and deported, while about 1200 others managed to escape. Only 8 of the 243 who were taken to Auschwitz returned home after the war.

Why You Should Visit:
Aside from the museum's exhibition of old Jewish life in the ghetto, you get to tour three ancient synagogues for a small extra fee.
The Ghetto Nuovo square is a beautiful little spot regardless of whether you enter the museum and is relatively quiet (compared to other parts of the city).

Tip:
Make sure to give yourself time to wander around the ghetto area itself, as there are quite a few cute/unique restaurants and bodegas.