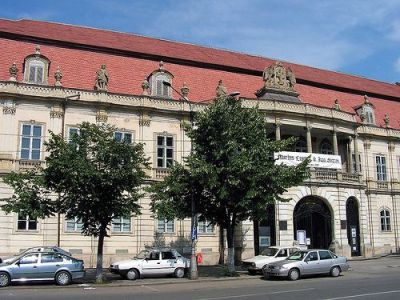 In February 1951 the council of the city decided to empty the palace to establish an Art Museum there; the works were finished in the summer of 1954. The museum was opened in the restored palace on 30 December 1965. The cinema occupying the inner yard of the palace was demolished in 1974. The floor area of the palace is 66×48 m, its inner yard is 26×26 m. The wings on the sides include one row of rooms while the front and back wing includes two rows. The yard is surrounded by a portico at the second-floor level. The facade is decorated with statues of Mars, Minerva, Apollo, Diana, Hercules, Perseus, and the coat of arms of the Bánffy family with gryphons, without crown. In the median risalit there is a gate, above this is a loggia with seven pillars.
Image Courtesy of Wikimedia and Roamata.
Sight description based on Wikipedia.