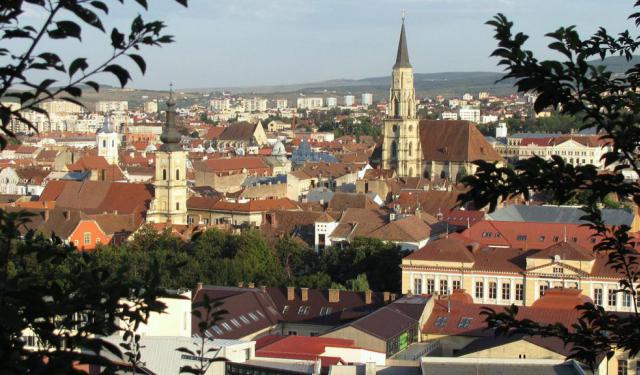 The unofficial capital of Transylvania set in the northwest of Romania, Cluj-Napoca (or Cluj for short) is the city of universities, bustling nightlife and historic sights - legacy of Saxon and Hungarian rule. The old town of Cluj is centered around Piața Unirii, sided by the Gothic St. Michael's Church, monumental statue of the 15th-century king Matthias Corvinus, and Baroque-style Bánffy Palace housing a Romanian art museum. To visit these and other attractions of Cluj, follow this orientation walk!
How it works: Download the app "GPSmyCity: Walks in 1K+ Cities" from iTunes App Store or Google Play to your mobile phone or tablet. The app turns your mobile device into a personal tour guide and its built-in GPS navigation functions guide you from one tour stop to next. The app works offline, so no data plan is needed when traveling abroad.

The Lucian Blaga National Theatre is one of the most prestigious theatrical institutions in Romania. The theatre shares the same building with the Romanian Opera. The theatre was built between 1904 and 1906 by famous Austrian architects Ferdinand Fellner and Hermann Helmer, who designed several theatres and palaces across Europe in the late 19th century and early 20th century, including the theatres in Iaşi, Oradea, Timişoara and Chernivtsi (Romanian: Cernăuţi). The project was financed entirely with private funds. The hall initially had a capacity of 928 places, being conceived in the Neo-Baroque style, with some inflections inspired by the Secessionism in the decoration of the foyer. Between 1950 and 1956 the stage house was extended to 1200 seats.
Image by ES Vic on Wikimedia under Creative Commons License.
Sight description based on wikipedia
2

The Cluj-Napoca Tailors' Tower is located at the southeast corner of the old Cluj-Napoca citadel. It was built in the 15th century and rebuilt between 1627 and 1629, taking its present form. It was named after the Tailors' Guild, who took care of and guarded this part of the city. Near the tower — where Baba Novac, general of Michael the Brave and Saski priest, was killed in 1601 by General Basta — there is a statue of Baba Novac. Deserted until 2007, the municipality of Cluj-Napoca undertook to include the tower in the city's touristic itinerary, financing its restoration. The tower will become a Centre for Urban Culture, based on a project offered by the Transylvanian Branch of the Architects’ Chamber of Romania in collaboration with BAU (Birou de Arhitectura si Urbanism). The Centre will host an exhibition space on the ground floor, as well as a library and a conference room on the upper floors.
Image by Cluj Napoca on Wikimedia under Creative Commons License.
Sight description based on wikipedia
3

The Saint George Monument represents Saint George heroically slaying a dragon. It was created in 1904 by Kálmán Lux and placed in Cluj in 1900. Saint George is quite significant to Romania, as there are many cities with the same name. The image of Saint George killing the dragon is featured on the flag of medieval Moldova sent by Stephen the Great to the Zografu Monastery from Mount Athos.
Image by Roamata on Wikimedia under Creative Commons License.
4

The Transfiguration Cathedral, also known as the Minorites' Church (Biserica Minoriţilor), was donated in 1924 by the Holy See to the Romanian Greek-Catholic Church to serve as the Cathedral of the Cluj-Gherla Eparchy, after the move of the Eparchy's center from Gherla to Cluj. The church and the monastery were built in 1778-79, but the tower collapsed on 24th September 1779 due to mistakes made at the basement level. The design was made by the architect of the Bánffy Palace, Johann Eberhard Blaumann. The tower and the roof of the church burnt down in 1798, and a temporary wooden roof was constructed. The new roof was built only in the 19th century. The murals of the ceiling were painted by Ferenc Lohr in 1908.
Image by Roamata on Wikimedia under Creative Commons License.
Sight description based on wikipedia
5

The Statue of Avram Iancu is located on stone blocks that symbolize the rocks of the Apuseni Mountains. The statue is encircled by a fountain. Avram Iancu was a Transylvanian lawyer, one of the leaders of the 1848–1849 revolt in Transylvania. Being the leader of an army in collaboration with the Austrian military authorities, he organized the defense of the Apuseni Mountains and resisted numerous attacks by Hungarian revolutionary groups.
Image by Burghiu on Wikimedia under Creative Commons License.
6

6) Dormition of the Theotokos Cathedral (must see)

The Dormition of the Theotokos Cathedral is the most famous Romanian Orthodox church of Cluj-Napoca. Built in a Romanian Brâncovenesc style, a synthesis of Renaissance and Byzantine architecture, it stands in Avram Iancu Square, alongside the Cluj-Napoca National Theatre and the Avram Iancu Statue. The Cathedral is the seat of the Metropolitan of Cluj, Alba, Crişana and Maramureş. It is dedicated to the Dormition of the Theotokos (Romanian: Adormirea Maicii Domnului). The cathedral was built between 1923 and 1933, after the Union of Transylvania with the Romanian Old Kingdom. Nicolae Ivan (1855-1936), at the time Bishop of Cluj, made a very important contribution in suggesting the location of the cathedral and in obtaining the necessary funds for its construction, which began on 10 September 1923.
Image by Alexandru Rap on Wikimedia under Creative Commons License.
Sight description based on wikipedia
7

The Iuliu Maniu Street, named after the Romanian politician Iuliu Maniu, is a central street connecting Avram Iancu and Unirii squares. It is parallel to the Eroilor and "21 Decembrie 1989" Avenues. The western part of the street, between Unirii Square and Bolyai Street, was built during the 19th century in a symmetrical manner, featuring the eclectic architectural style, accordingly the Haussmann urbanistic trend. It is commonly called strada oglindă (mirror street).
Image by Danutz on Wikimedia under Creative Commons License.
Sight description based on wikipedia
8

Image by Roamata on Wikimedia under Creative Commons License.
Sight description based on wikipedia
10

10) National Museum of Art (must see)

The Church of Saint Michael is a Gothic-style Roman Catholic church in Cluj-Napoca. It is the second largest church in Transylvania. The nave is 50 meters long and 24 meters wide, the apse is 20×10 m. The tower with its height of 76 meter is the highest one in Transylvania. The western portal is decorated with the three coats of arms of Sigismund as King of Hungary, as King of the Czech Kingdom and as Holy Roman Emperor.

The construction was begun probably in place of the Saint James Chapel. The financing of the church was partly done by the citizens, partly from the income of indulgences. The construction was completed between 1442-1447, the old tower was built between 1511-1545. The tower that stands today was erected in 1862.

The oldest of its sections is the altar, inaugurated in 1390, while the newest part is the clock tower, which was built in Gothic Revival style (1837-1862).

Image by bettyx1138 on Flickr under Creative Commons License.
Sight description based on wikipedia
12

12) The Ethnographic Museum of Transylvania (must see)

The Ethnographic Museum of Transylvania (in Romanian Muzeul Etnografic al Transilvaniei) is situated in Cluj-Napoca, Romania. With a history of more than 80 years, the Ethnographic Museum of Transylvania is one of the first and greatest of its kind in Romania. It has two exhibition sections, one of which is to be found in downtown Reduta Palace, while the other exhibition section is the open-air Romulus Vuia Park situated on the city's north-west side, in Hoia Forest.

The museum has a collection of more than 50,000 objects reflecting the occupations, the habits and the life style of the Transylvanian rural population. Part of this collection is to be found in the Reduta Palace while the rest of the objects are in the open-air section. The collection here presented is a representative selection of the items and clothes used in rural everyday life. Besides, Reduta Palace also houses a collection of some 50,000 photographies and some 5,000 diapositives. The library of the museum has some 12,000 scholarly journals and specialized magazines.

Operation hours: Wednesday - Sunday: 10 am - 6 pm.
Image by bettyx1138 on Flickr under Creative Commons License.
Sight description based on wikipedia
13

The Matthias Corvinus House (Romanian: Casa Matei) is one of the oldest buildings in Cluj-Napoca, Transylvania. It was built in the 15th century as a small guesthouse. During its history, the house served as a jail, hospital, and museum; it is now home to a visual arts institute. Matthias Corvinus, son of John Hunyadi the legendary Transylvanian warrior, Voivode of Transylvania, later one of the most renowned kings of Hungary, was born in this building.
Image by Istvánka on Wikimedia under Creative Commons License.
Sight description based on wikipedia
14

Museum square is a special place in the heart of Cluj. It holds a number of historic and architectural sights, including The National Museum of Transylvanian History, featuring collections of antiquities, zoological and mineralogical artifacts, the Franciscan church, and the Carolina Obelisk. In addition to these, there is a good choice of quaint restaurants and terraces to sit and suck in the atmosphere of this old and picturesque town.
Image by Wikizoli on Wikimedia under Creative Commons License.
15

Central Park, located in the center of Cluj-Napoca, has very old origins yet remains the most beautiful and scenic park in the city. The statuary group in the park features an extraordinary fountain. The park's lovely lake is large enough to allow for boating by visitors.
Image by Roamata on Wikimedia under Creative Commons License.