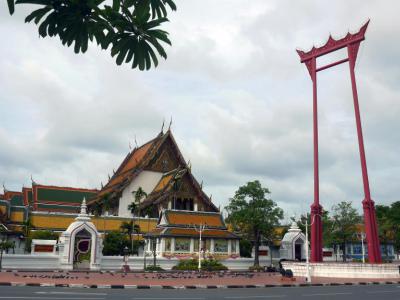 The Giant Swing is a religious structure and one of Bangkok's top tourist attractions. Set in front of the Suthat Temple, this huge Chinese-red colored frame was part of an annual ceremony whereby young men would try to swing up in the air in order to get a sack full of gold tied to a pole, some 75 feet high. After many men died during such an attempt, the ceremony was finally banned in the 1930s.

The Swing Ceremony was one of the 12 royal ceremonies held each month of the Thai Lunar calendar. At the height of 21.15 meters, from base to top, this giant swing is a great memorial to an abolished tradition in the history of Thailand and a true landmark of Bangkok. Its presence in front of the temple is an illustration of the once strong influence of Brahmanism in Thailand. The original swing was built only two years after the establishment of Bangkok as a new capital in 1782. Its story began when a Brahman, named Kratai, was granted audience with King Rama I (1782-1809) and asked for permission to uphold Brahmanism in Siam, i.e. to build a Brahmanic temple and a swing to conduct Brahmanic ceremonies. The King agreed and soon after not one but three Brahmanic temples and a swing appeared in the center of the city in 1784.

In the early 19th century, a huge 25-foot tall Phra Sri Sakyamuni Buddha statue was brought from Sukhothai by boat. To house that gigantic Buddha image, the Wat Suthat, one of Bangkok's tallest wiharns, was built in a large cloister. Its outer wall is lined with more than 150 Buddha images originally shipped from China, as a ballast, in rice boats. They are now displayed in the courtyard between the Buddha gallery and the wiharn. The walls are painted with murals depicting the last 24 lives of Buddha. The columns are also painted with murals showing the early days of Bangkok.

The original height of the swing is not confirmed to date. After over 100 years, when the old swing had decayed, it was replaced with a new one made of teak in 1920, during the reign of King Rama VI. That swing was renovated twice, in 1947 and 1970, and for 36 years had stood elegantly as one of Bangkok's major landmarks. After its condition had deteriorated again, it was replaced with another replica in 2006.