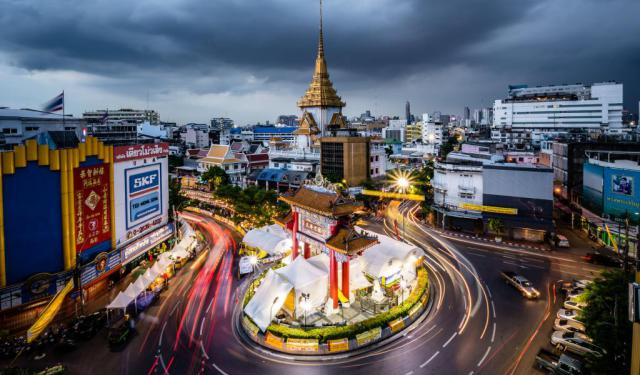 Image by Marco Nürnberger on Flickr under Creative Commons License.

One of the city's brightest, most vibrant and interesting districts, Chinatown is packed with some of the best tourist spots in Bangkok including amazing temples and colonial-style architecture. Easily explored on foot, it is also a great place to find good bargains, from fabrics to dry goods, to teas, fish, and gold. Don't forget to bring small bills and an umbrella while visiting the top sights with this self-guided tour!
How it works: Download the app "GPSmyCity: Walks in 1K+ Cities" from iTunes App Store or Google Play to your mobile phone or tablet. The app turns your mobile device into a personal tour guide and its built-in GPS navigation functions guide you from one tour stop to next. The app works offline, so no data plan is needed when traveling abroad.

Built in 1999 as part of the celebrations of King Bhumibol Adulyadej's 72's birthday, the Chinatown Gate is sometimes called "Odean Gate" after the Odean cinema that once stood nearby. The words on the gate say "Sheng Shou Wu Jiang", translated as "Long Live the King". During Chinese New Year celebrations, the gate becomes the center of activities where people make their offerings.

Chinatown Gate is the entrance to many sites, a brief description of which is given below:

- Wat Traimit, a small temple, home to the world's largest five-ton-plus solid gold Buddha image;
- Li Thi Miew Temple, one of the more open and accessible of many Chinese temples in Chinatown;
- Wat Kanikaphon, a small temple with some interesting details, founded by a former Madame who owned a brothel;
- Tien Fa Charity, a small clinic run by a charitable foundation, with a large chapel to the goddess Ming in its courtyard;
- Sampaeng Lane, Chinatown's original main street, now a small narrow alley crowded with shops selling mostly inexpensive household items and a very old Chinese pharmacy – definitely worth a look;
- Wat Mangkon Kamalawat, the Chinese-Buddhist temple – a center of festivities during important festivals such as the Chinese New Year and the vegetarian festival;
- Phahurat Market, a small community center for Sikhs and other immigrants from the subcontinent, home to a large number of fabric and wedding stalls;
- Wat Chakrawat, one of Bangkok's three biggest monasteries, housing some very unusual buildings and a few crocodiles!;
- The Old Siam, a shopping center where you will find tourist-friendly western and Thai restaurants and fast food outlets.

In short, Chinatown Gate gives you the visa to enter into a whole new world to explore and enjoy!

Tip:
Plan ahead so you can visit the top spots and leave room in your stomach for the unexpected – but be sure to eat where the locals are queueing.


Image by leo.laempel on Flickr under Creative Commons License.
2

2) Wat Traimit (Temple of the Golden Buddha) (must see)

On the eastern edge of Chinatown, the Wat Traimit Witthayaram is home to the world's largest solid gold Buddha – 3 meters (9.8 ft) tall and weighing 5.5 tonnes – and is consequently known also as the Temple of the Golden Buddha.

Worth millions of dollars at today's gold price, the Golden Buddha was cast sometime in the 13th century and is an excellent example of the gracious Sukhothai style. This statue has such a bright, reflective surface that its edges seem to disappear, and it shines with such richness and purity that everyone is inspired by it. At one point, it was covered in plaster and colored glass – presumably to disguise it from Burmese invaders – and remained like this for nearly two centuries. Only in 1955, when an accident while moving it caused the surface to crack off, was its true nature revealed.

The Golden Buddha is now installed at the highest level of Wat Traimit, with the plaster pieces that once hid it from looters being displayed in a case to the left. The gold, the gems, the mosaic patterns all combine to make a spectacular sight.

Few of the Thai temples also have two quite interesting museums incorporated – this one does! The 2nd-floor exhibits cover the history of Bangkok's Chinese community and the 3rd-floor exhibits allow you to learn more about the story of the Golden Buddha itself.

Established during the reign of King Chulalongkorn (Rama V) in 1903 and completed in 1905 with the intention of helping the poor who could not afford medication at the time, this shrine in front of Thia Fa hospital in Chinatown once again demonstrates that those in need of medical care are just as much in need of spiritual care.

Bodhisattva Kuan Yim, an ancient Chinese goddess, embodies the virtues of love, kindness, compassion and forgiveness, a legend that goes back almost 3,000 years. A beautiful statue of her, estimated to be about 800-900 years old, was imported from China in 1958 and has been in the center of this shrine ever since. Open 24 hours, the shrine is very popular with both the Chinese and the Thai. People visiting patients in the hospital as well as, for instance, students who need support for getting through their exams often come to pray and offer flowers.
Image by Iudexvivorum on Wikimedia under Creative Commons License.
4

Once a poultry farm, this one-way street is now the heart of Chinatown's (and Thailand's) gold trade, with over 100 dealers of the precious metal, their shops painted gold and bright red for good luck and flaunting glittering displays of bracelets and necklaces. More often than not, gold is sold here by the bàht (equivalent to 15g, or about half an ounce), with daily prices scrawled on the windows.

Chaotic as it may seem, Yaowarat Road serves as the central artery to a network of street markets twisting down side alleys, and as you stroll further toward the intersection of Ratchawong Road, you will get a good feel for the pulse, energy and of course the smells of Chinatown.

There are always plenty of things to satisfy tourists' tastes – from dried fruit and nuts to chintzy talismans and accouterments for Chinese festivals. Each evening the street gets even busier as food stalls and vendors occupy every inch of space available, while the forest of neon signs makes it look in places much like a Hong Kong thoroughfare.
Image by Juan Antonio Segal on Flickr under Creative Commons License.
5

In continuous operation for over two centuries, Bangkok's oldest market overflows with a smorgasbord of local culture, still preserving many ancient traditions such as the morning lantern-hanging ceremony. Although quite narrow all the way, it is a safe environment to find delicious "dim sum" (tender bite-sized morsels that are very well-done) and other authentic Chinese cuisine offerings. For those with a hearty appetite, there's a great restaurant at the far-end left side (try the duck noodles or the succulent grilled duck!) and right next to it, a great bakery.

All manner and size of freshwater and saltwater fish and shellfish are displayed here, alive and filleted, but the place is just as convenient for buying a wide variety of vegetables, exotic fruits (both fresh and dried), spices, nuts, and other dried foodstuff. Due to being located in the heart of Chinatown, Talat Kao is particularly crowded around the Chinese New Year.
Image by Jorge Láscar on Flickr under Creative Commons License.
6

Hidden in the narrow alleys of Bangkok's Chinatown, this Chinese shrine is considered to be the oldest in Thailand, based on a plaque contained inside with an inscription stating that it was built in 1658, during the Ayutthaya period. Thought to have originally been a Teochew-style shrine, it would have been used by Chinese businessmen aiming to improve the prosperity of their businesses and to establish social connections.

Small and very colorful, the shrine has a roof made of glazed tiles, adorned with two ceramic-clad dragons. The central altar is dedicated to Leng Buai Ia and his wife, while to the left and right there are altars to the deity Gong Wu (Guan Yu) and the Queen of Heaven, Tianhou, respectively.

Near the entrance is an ancient bell attributed to the Daoguang Emperor, towards the end of the Qing dynasty. Other items of interest include three plaques from the reign of the Kangxi Emperor in the Qing dynasty, a bell inscribed with the name of Choen Thai Chue, and a container for incense sticks given as a gift from King Chulalongkorn (Rama V).
Image by Alan Oscroft on Wikimedia under Creative Commons License.
7

At the heart of Bangkok's Chinatown, the "Dragon Lotus Temple" – an official name bestowed by Rama V– is among the largest and most important temples for Chinese culture in Thailand. Founded in 1871, it hosts a number of year-round events including the Chinese New Year (in January or February) and the Chinese Vegetarian festival (in September or October). Worshippers can be seen here lighting incense sticks and filling the ever-burning altar lamps with oil along with making offerings to their ancestors.

With the ubiquitous Chinese dragons on the roof and numerous shrines dedicated to a variety of Buddhist, Taoist and Confucian deities and religious figures scattered all around it, the temple is built and beautifully decorated in typical Chinese style, so a visit offers the opportunity to contrast with both the Thai "wat" style and the more famous Temple of the Golden Buddha located nearby. The guardians at the front entrance are huge and very interesting, and the three Buddha statues haloed with neon lighting are thrilling to see. Go check it out!
Image by กสิณธร ราชโอรส under Creative Commons License.