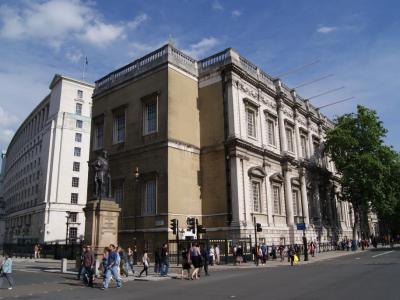 The Banqueting House in London's Whitehall is the grandest and best known survivor of the architectural genre of banqueting house, the only remaining component of the Palace of Whitehall. Built in 1622 in neoclassical style, it marked a new, transformation step in the history of English architecture. 27 years later, in January 1649, King Charles I of England was executed right in front of this building, on a scaffold. Today, the Banqueting House is a listed national monument, open to the public.

The Palace of Whitehall was largely the creation of King Henry VIII, who expanded an earlier mansion that once belonged to Cardinal Wolsey and was originally known as York Place. The King was determined to make his new palace the "biggest palace in Christendom" to befit his newly created status as the Supreme Head of the Church of England. All evidence of the disgraced Cardinal Wolsey was eliminated and the building rechristened the Palace of Whitehall. During Henry's reign, the palace had no designated banqueting house; the King preferred to banquet in a purpose-built temporary structure in the gardens.

The first permanent banqueting house at Whitehall had a short life. Built for James I, it was destroyed by fire in January 1619 when the workmen, clearing up after New Year's festivities, decided to incinerate the rubbish inside the building. An immediate replacement was commissioned from the fashionable architect Inigo Jones. Jones had spent time in Italy studying architecture evolving from the Renaissance and that of Palladio, and returned to England with what at that time was considered revolutionary ideas: to replace the complicated and confused style of the Jacobean English Renaissance with a simpler, classically inspired design. His new banqueting house at Whitehall was to become a prime example of this. Jones made no attempt to harmonize his design with the Tudor palace of which it was to be a part.

Opening hours: Monday to Sunday from 10 am to 5 pm (last admission at 16:15). Entry fees: adults - £5.00; children under 16 – free; full-time students, over 60 years with ID - £4.00.
Image by Smuconlaw. on Wikimedia under Creative Commons License.
Sight description based on wikipedia