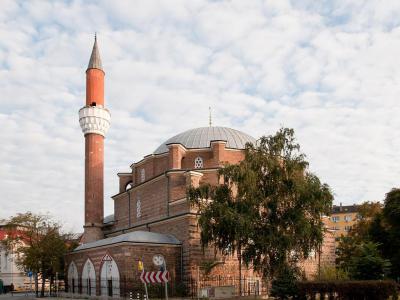 The Square of Tolerance in Sofia is not an open square. Two Christian churches a synagogue and a mosque are at different points of a large rectangle filled with other buildings. The concept of Tolerance in Bulgaria dates from 11 AD, when the Emperor Galerius gave up persecutions and issued his Edict of Toleration.

The Edict applied to all of Sofia (it was called Serdica back then) and the Empire. The Mosque in the rectangle is Banya Bashi Mosque. Banya Bashi means, literally, "many baths." The mosque was built over ancient thermal baths. Until the liberation of Bulgaria in 1878, the square in front of Banya Bashi Mosque was the center of Sofia. There were mineral baths, a fountain and markets.

The mosque was designed by Koca Mimar Sinan. The mosque was ordered by the Kadi of Sofia, Kadi Seyfullah Effendi in memory of his deceased wife. The construction was finished in 1566. The mosque has four domes with a single minaret in the center. The main entrance is an arcade supported by three stone pillars. The domes are covered in lead.

The main room is a cube with a dome strengthened by half-arches. Inside, the dome becomes the sky, with the Lord overhead. The interior of the mosque is covered with floral and geometrical motifs and Islamic calligraphy. There is a sense of endless space. The mosque can accommodate about 700 devotees. Friday services are especially lively.
Image Courtesy of Wikimedia and MrPanyGoff.