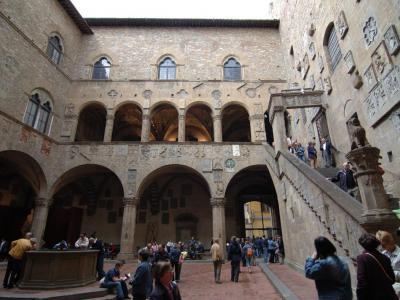 If Florence, in general, is a paradise for architecture buffs and art lovers, then the Bargello museum is even more so. Occupying a medieval fortress, this museum houses some of Italy's most valuable sculptures and other works of art.

Also known as the People's Palace (Palazzo del Popolo), this is one of the oldest structures in the city, dating back to 1255. Throughout its history, the building has served many different roles. Early on, back in the 16th century, it accommodated the so-called Captain of the People, the police chief of Florence, called “bargello”, hence the name of the palace. After that, the Bargello Fortress served as a prison, up until the mid-19th century, upon which it was converted to a museum displaying a large collection of Gothic and Renaissance sculptures.

Among the displayed artifacts here are the works of Donatello, Michelangelo, Verrochio, Brunelleschi, and other greats. Notably, Donatello’s statue of David was the first male nude sculpture ever exhibited since ancient times, thus manifesting a turn in the history of European art. The inner courtyard of the museum is an elegant space crammed with the relief and free-standing sculptures; however, the most famous items are placed in the gallery, off the courtyard, and in the large exhibition space above.

Apart from the Renaissance items, the collection includes rare artifacts from the Byzantine, Roman and Medieval eras. Alongside sculptures, you can find here jewelry pieces of the European Renaissance and Islamic origin, too. For visitors convenience, all the exhibits are accompanied by English descriptions.

***MICHELANGELO'S MASTERPIECES***
The museum houses masterpieces by Michelangelo, such as his Bacchus, Pitti Tondo (or Madonna and Child), Brutus and David-Apollo. Bacchus is depicted with rolling eyes, his staggering body almost teetering off the rocky outcrop on which he stands. With its swollen breast and abdomen, the figure suggested to Giorgio Vasari "both the slenderness of a young man and the fleshiness and roundness of a woman", and its androgynous quality has often been noted. The sense of precariousness resulting from a high center of gravity can be found in a number of later works by the artist, most notably the David and the figures on the Sistine Chapel ceiling. Bacchus was carved when Michelangelo was only 22.

Tip:
To better plan your visit to Bargello National Museum, check out the museum's website in advance for opening hours, noting that on special occasions it may close rather late. Those brave enough to wander around the eerie, empty medieval building late in the evening, get to enjoy the sculptures all by themselves.
Image Courtesy of Flickr and Francesco Gasparetti.