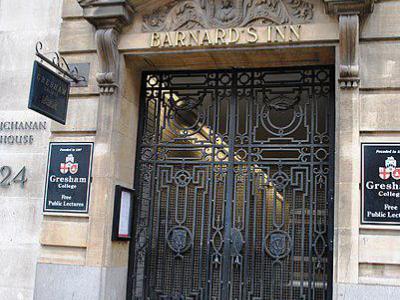 Barnard's Inn is one of the former Inns of Chancery in Holborn. Back in 1454, the inn was tenanted by Lionel Barnard, hence the name.

Today it is the home of Gresham College, a law school established in 1597, and one of a number of the Inns of Court with which Charles Dickens and his books had associations. In "Great Expectations", the main hero Pip lodged in Barnard's Inn with Herbert Pocket for a number of years following his arrival in London, which would have been circa 1820.

In the novel, Dickens presents Barnard's as “the dingiest collection of shabby buildings ever squeezed together in a rank corner as a club for Tom-cats.” “A flat burying-ground [with] the most dismal trees in it, and the most dismal sparrows, and the most dismal cats, and the most dismal houses... the windows of the sets of chambers into which those houses were divided, were in every stage of dilapidated blind and curtain, crippled flower-pot, cracked glass, dusty decay, and miserable makeshift; while To Let To Let To Let, glared from empty rooms, as if no new wretches ever came there, and the vengeance of the soul of Barnard were being slowly appeased by the gradual suicide of the present occupants and their unholy internment under the gravel.”
Image by Elisa.rolle on Wikimedia under Creative Commons License.
Sight description based on wikipedia