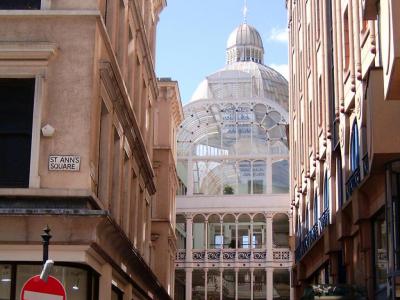 Barton Arcade is a winding covered arcade that runs from Deansgate to St. Ann’s Square in the heart of Manchester’s fashionable shopping district. It makes a worthwhile diversion to any walking tour of the city centre’s best architectural sights. Hidden from view by a façade in front of its main entrance, the arcade offers customers a remarkable view as they enter the arcade from Deansgate. Built in the Victorian era, the arcade curves in a U-shape, with arcing balustrades on the upper floors giving the arcade an unusual, almost otherworldly feel. The roof of the arcade is an ornate multi domed construction, composed of glass and wrought iron.

Barton Arcade is one of Northern England’s most elaborate and well preserved examples of the Victorian passion for arcades. The concept of these covered shopping streets, often winding and topped with ornate glass roofs, was imported from continental cities in the Victorian era. Barton Arcade was constructed in 1871, and extensively restored in the 1980s. It currently houses a number of offices on the upper floors, and boutique clothes stores, bars and restaurants in the ground floor retail units. Famous designers Ed Hardy and Jeffrey West both have outlets in the arcade. The arcade does close to pedestrians outside of retail hours – it’s open from 9am until 5.30pm Monday to Saturday, and 10am to 4.30pm on Sunday.
Image by Pit-yacker on Wikimedia under Creative Commons License.