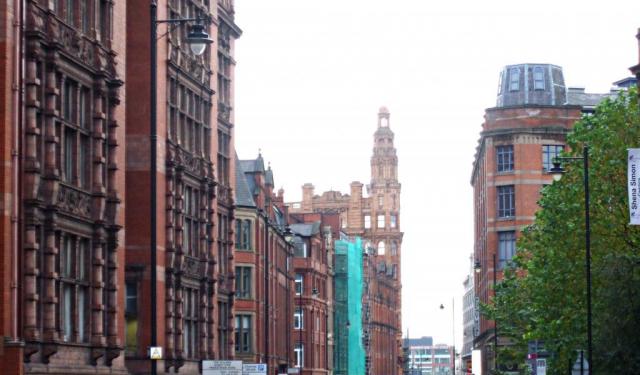 A product of the Industrial Revolution, Manchester is noted for its warehouses, railway viaducts, cotton mills and canals, reflecting the most ambitious and exciting phase of its past. Much of the city's architecture developed during the reign of King Edward VII, 1901-1910, which gave birth to the Edwardian architectural style so much popular in the United Kingdom at the turn of the 20th century. To distinguish Edwardian architecture from the vast array of other styles present on the streets of Manchester, take this self-guided walk and discover yet another beautiful side of the city!
Image Courtesy of Wikimedia and Clem Rutter, Rochester, Kent.
How it works: Download the app "GPSmyCity: Walks in 1K+ Cities" from iTunes App Store or Google Play to your mobile phone or tablet. The app turns your mobile device into a personal tour guide and its built-in GPS navigation functions guide you from one tour stop to next. The app works offline, so no data plan is needed when traveling abroad.

London Road Fire Station is a former fire station in Manchester. It was opened in 1906, on a site bounded by London Road, Whitworth Street, Minshull Street South and Fairfield Street. Designed in the Edwardian Baroque style by Woodhouse, Willoughby and Langham in red brick and terracotta, it cost £142,000 to build and was built by J. Gerrard and Sons of Swinton.

In addition to a fire station, the building housed a police station, an ambulance station, a bank, a coroner's court, and a gas-meter testing station. The fire station operated for eighty years, housing the firemen, their families, and the horse-drawn appliances that were replaced by motorised vehicles a few years after its opening. It was visited by royalty in 1942, in recognition of the brigade's wartime efforts.

The fire station closed in 1986, since when it has been largely unused despite several redevelopment proposals. It was placed on English Heritage's Buildings at Risk Register in 2001 and in 2010 Manchester City Council served a compulsory purchase order on the fire station's owner, Britannia Hotels. It was sold to Allied London in 2015 and renovation commenced in 2018 with the building to be redeveloped as a mixed-use comprising leisure and hotel facilities.

Running for a mile from east to west between Manchester’s Piccadilly and Deansgate stations, Whitworth Street is one of Manchester city centre’s most historic streets. The long lane runs alongside a rail viaduct, cutting through the southern side of the city centre – becoming Whitworth Street West for the western half of its diameter. The street is named after local manufacturer and philanthropist Sir Joseph Whitworth, creator of the Whitworth rifle. His works building once stood on Whitworth Street, part of the Edwardian industrial heritage Manchester is known for, and which can best be seen along this avenue.

Whitworth Street is characterised by the grand, well preserved Edwardian warehouses which line its length. The area developed after the opening of Manchester’s Ship Canal in 1894, which opened the city up to international maritime trade. Many buildings constructed in the early 20th century still remain, including Manchester University’s Sackville Street building and India House, both of which are Grade II listed buildings. The street also has links to Manchester’s recent history, with the former Hacienda nightclub situated in the middle of the street, and the still active Ritz nightclub located on Whitworth Street West. Both venues helped make Manchester arguably the musical capital of the UK in the late 20th century.

Asia House at No. 82 Princess Street, Manchester, England, is an early 20th century packing and shipping warehouse built between 1906 and 1909 in an Edwardian Baroque style. Asia House has an "exceptionally rich" entrance hall and stairwell, "lined with veined marble and green and cream faience, with designs of trees and Art Nouveau stained glass". Its façade is pink-brown sandstone, brick and marble while the side elevations, where the service and workers entrances were located, are in glazed white brick and the rear common brick.

Asia House was converted for residential use in 2003 and the basement is a car park. Mike McKenna, University Challenge 2011–12 winner lives here and Noel Gallagher, singer songwriter with Oasis, is a former occupant.
Image Courtesy of Wikimedia and KJP1.
Sight description based on Wikipedia.
4

The Hulme Hall is an agglomerate of several locations, such as the Old Dining Hall, the Library, the Chapel, the Senior Common and Seminar Room and a theater for 300 seats. All the named buildings were built as additional facilities for a student’s hostel. Housing about 300 students annually, this complex is perfect for living and studying.
Image Courtesy of Wikimedia and KJP1.
5

India House in Whitworth Street is a packing and shipping warehouse built in 1906. It is in the favoured Edwardian Baroque style and is steel-framed, with cladding of buff terracotta and red brick with buff terracotta dressings. The building was designed by Harry S. Fairhurst, "the leading expert in the design of these advanced warehouses", who was also responsible for the neighbouring Lancaster House.

It was constructed for Lloyd’s Packing Warehouses Limited and like many warehouses was built to a common design with steps to a raised ground floor with showroom and offices and the first floor contained more offices and waiting rooms for clients and sample and pattern rooms all decorated to impress customers. The working areas above were plain with large windows to allow in natural light. Orders were packed there and sent to the basement on hoists powered by Manchester's hydraulic power system and packed into bales using hydraulic presses before dispatch. The warehouse was lighted by gas.
Image Courtesy of Wikimedia and KJP1.
6

Canada House is an Art Nouveau-style office building on Chepstow Street. Designed by local architects W & G Higginbottom (brothers Walter and George Harry Higginbottom), the building has features consistent with art nouveau and has a terracotta exterior. Canada House is one of many warehouses in Manchester alongside Watts Warehouse, Asia House, India House and Churchgate House. Canada House is a Grade-II listed building.

The building was extensively renovated during the 1990s. Tenants of Canada House include English Heritage who have their North West office at the building, sportwear company Puma, Omnicom Agency The Marketing Arm and a Bannatyne Health Club.
Image Courtesy of Wikimedia and Stephen Richards/ CC BY-SA 2.0.
Sight description based on Wikipedia.
7

The former National Westminster Bank in Spring Gardens, Manchester is a Grade II* listed building constructed in 1902. The bank is in a "bold Edwardian Baroque"style, built of red sandstone with a corner tower and cupola, Doric columns supporting nothing but ornamental brackets, and hooded gables. The vast plate glass windows designed to illuminate the banking hall are particularly striking, each with "a large round-headed window filling the width of each bay, with moulded head, scrolled keystone, and plate-glass glazing with enriched bronze 'ferramenta' including a horizontal mid-panel, bottom panels with stained glass, and arched upper lights with margin panes".

The interior is "amongst the most opulent of any of the date surviving in Manchester. The foyer has mahogany panelling, whilst the main banking hall is walled with green marble. The stained glass, some of which is original, and the ironwork on the exterior are Art Nouveau. The bank is now a bar.
Image Courtesy of Wikimedia and KJP1.
Sight description based on Wikipedia.
8

53 King Street is an Edwardian Baroque bank on King Street. Designed by architect Charles Heathcote, it opened in 1913 and was granted Grade II listed building status in 1974. The building stands on the site of the old Manchester Town Hall. The bank, designed in an elaborate Baroque style, is built on an L-shaped site with seven bays on King Street and eight bays facing Cross Street and between them a chamfered corner. It is constructed of Portland stone on a granite plinth and has a basement with four storeys above and double attics.
Image Courtesy of Wikimedia and Stephen Richards / CC BY-SA 2.0.
Sight description based on Wikipedia.
9

The Triangle Shopping Centre is housed in an Edwardian building on Exchange Square, in Manchester’s regenerated Millennium Quarter. There has been a commercial centre standing on this spot since 1837, when the first trading floor opened. The triangular building that contains the shopping centre was built in 1897, and opened its doors as a Corn Exchange in 1903. Like the nearby Royal Exchange, the building was a thriving centre for the trading of goods in Depression era England, and contributed to Manchester’s growth as the industrial and commercial centre of the region.

After World War 2, the building fell into disuse, before becoming a bohemian flea market in the 1970s.

The building became well known for its alternative stores selling clothes and jewellery, as well as a range of cafes. Bomb damage from the IRA blast in 1996 led to extensive regeneration, and caused a great number of these shops and stalls to be relocated. Now refitted with a modern interior inside the listed Edwardian frontage, the building is home to a number of designer outlets. Famous brands like Adidas, Muji, O’Neill and Jigsaw have stores within the centre, and it is also home to local radio station Galaxy Manchester.
Image Courtesy of Flickr and Wendy Mann.