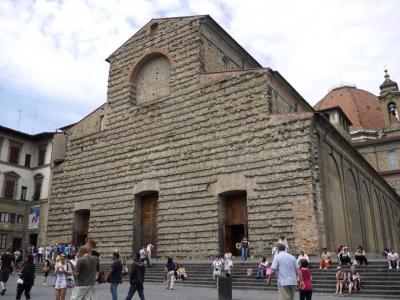 Amidst the hustle-bustle of the Mercato Centrale (Central Market) stands arguably one of the oldest churches in the history of Florence. San Lorenzo is said to date back to the late Roman era and is also the city's largest basilica. Inside, it is as ornate and magnificent as you'd expect for the main worship site and burial ground of the Medici family, although you would not know it by looking at the never-finished façade.

One of the most powerful families in the history of Florence, the Medici family commissioned Filippo Brunelleschi to redesign the San Lorenzo with modern Renaissance-style elements, while an elaborate marble façade was left to Michelangelo to complete. Unfortunately, the untimely death of Brunelleschi and Giovanni di Bicci de' Medici led to the project being abandoned much to the humiliation of Michelangelo who did, however, design and build the internal façade, seen from the nave looking back toward the entrances.

Remarkable all throughout, the interiors follow a Renaissance style with white and grey columns and beautiful marble decoration in front of the altar that marks the grave of the first Medici ruler. Along the central nave are the two bronze pulpits by Donatello (his very last works), whose tomb can be found in the crypt along with that of Cosimo I de' Medici. The complex also includes the New Sacristy with Michelangelo's incredible Medici tombs depicting day and night, dusk and dawn, and the 17th-century Chapel of the Princes, also absolutely gorgeous with its huge dome and fresco arrangement.

There is so much to see that time will fly by as you look at the stunning frescos, the delightful dome with its lovely artwork, or explore all the cloisters, small gardens, and the Laurentian Library – another Michelangelo creation. The serenity here is wonderful by itself, and a nice respite from the other, more popular tourist destinations in Florence.

Tip:
Different sections have different doors, and you must show your Florence Card or pay for each individually. The Chapel of the Princes and the New Sacristy (Michaelangelo tombs) are closed after 1:30pm.
The market area around San Lorenzo is very nice, so you might want to have a drink/meal on the piazza in front of the Central Market.