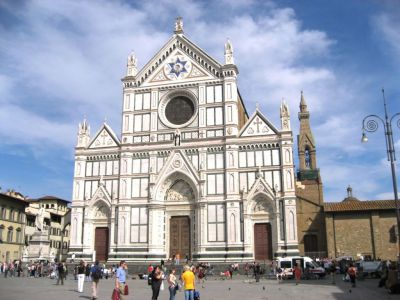 One of the most famous and the largest Franciscan churches in the world, Basilica di Santa Croce was built between the 13th and 14th century, flaunting a rich Gothic style of architecture. Also known as the Temple of the Italian Glories, it has the final resting places of some of the most illustrious Italians, such as Michelangelo, Galileo, Machiavelli, the poet Foscolo and the composer Rossini.

Elaborate sculptures decorate the tombs while paintings adorn the altar and walls. Some of the finest artisans, sculptors and painters have left their marks upon the church, which is sure to grip visitors with its grandeur and presence. Artists with work in the church include Giotto, Donatello, Giorgio Vasari, Domenico Veneziano, Antonio Canova, Cimabue, Benedetto da Maiano, Andrea and Luca della Robbia, Desiderio da Settignano, Giovanni da Milano, Maso di Banco, Agnolo and Taddeo Gaddi, Andrea Orcagna, Antonio Rossellino, Santi di Tito, and Henry Moore. Legend even has it that the Santa Croce was founded by Saint Francis himself!

The grounds are quite nice as well, and the grassy inner courtyard, with its columns and statuary, encourages to take time to explore – or spend all day here with a sketchbook! The outside plaza holds multiple events, from concerts by visiting musicians to Florentine "rugby".

***MICHELANGELO'S MASTERPIECES***
Directly against Michelangelo's plans, his dead body was taken from Rome to Florence where Cosimo de' Medici and the artist/biographer Vasari arranged a lavish funeral on March 10, 1564. Since he was not able to employ the artist and honor him in Florence during his life, declared de' Medici, he would honor him in death, and with a proper tomb to match.

The monumental tomb inside the church – which ended up costing a massive sum and took 14 years to complete, due to delays – was commissioned to the same Vasari, who included traditional symbols and imagery relevant to Michelangelo. Next to the artist's bust, there are three intertwined laurel wreaths representing the union of the artistic domains of Painting, Sculpture and Architecture, which are also depicted below as three muses mourning the loss of the great artist.

***DANTE'S FLORENCE WALK***
Dante's empty sarcophagus was installed here after Florence spent a lot of years trying to get his remains back to the city of his birth. Rejected when he was alive, Dante now rests in his adopted city of Ravenna, despite Florence's posthumous forgiveness and acceptance of the exiled poet. A monument of Dante – erected in 1865 to celebrate the 600 year anniversary of his birth – stands outside in Piazza Santa Croce, named after the basilica that overlooks it.

Tip:
Don't miss the Leather school behind the church where young interns are learning the trade and where you can buy some fantastic handmade one-offs.
Please remember that shorts have to be below knee and women must have shoulders covered and no midsection exposed. They enforce the shorts rule on the women more than the men.