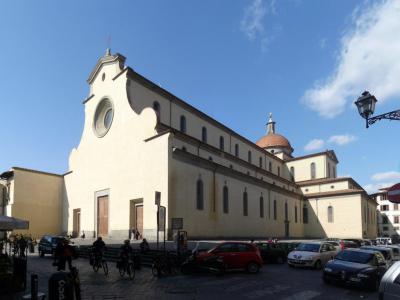 The Santo Spirito is another Florence building credited to the brilliant Renaissance architect – Filippo Brunelleschi. At first glance, with its plain exteriors, it may not look very impressive, but the true beauty and design can be appreciated in the interiors featuring numerous Baroque embellishments and an impressive Baldachin with polychrome marbles over the high-raised altar. The side chapels, in the form of niches all the same size (forty in all), run along the entire perimeter of the space and contain a noteworthy amount of artworks by Renaissance artists such as Sansovino and Rosselli. Some of the pieces that have been restored are fantastic in color and definition.

The two cloisters – accessed for a small fee – have walls decorated with a great number of tombstones and impressive Late Gothic frescoes, as well as a collection of sculptures from the 11th-15th centuries, including two low reliefs by Donatello, a high relief by Jacopo della Quercia (Madonna with Child), and two marble sculptures by Tino da Camaino (1320–22).

***MICHELANGELO'S MASTERPIECES***
In a side chapel is a very special find—a wooden crucifix sculpted by a young Michelangelo before he relocated to Rome. Aged seventeen, he was allowed to make anatomical studies on the corpses coming from the convent's hospital; in exchange, he sculpted the crucifix which was placed over the high altar. Today the crucifix is in the octagonal sacristy that can be reached from the west aisle of the church. Also, don't miss the copies of his Pietà (1549) and Christ (1579).

Tip:
Be sure to visit the museum, Fondazione Salvatore Romano to the side of the Basilica in the old refectory.