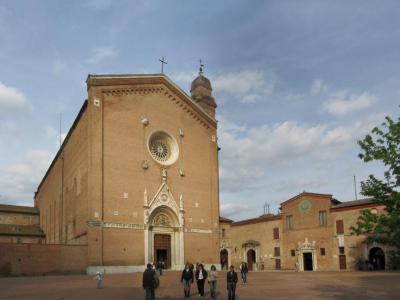 The Basilica of San Francesco is a 13th century church that was once attached to a Franciscan convent and renaissance cloister. The convent and the cloister today house the law faculty of the University of Siena and its library. The Basilica of San Francesco was built by Francesco di Giorgio Martini between 1228 and 1255. At first the building had a Romanesque facade. It was gutted by a fire in 1655 and the original interior artwork was destroyed. The structure was expanded in the 14th and 15th centuries and its present large facade has a Gothic design. The basilica is on the Egyptian Cross plan, with a nave covered by spans and a transept, according to type favoured by the Mendicant Orders, which needed spaces capable to house large crowds of faithful. It has a single nave and chapels in the transept. The frescoes on the walls are by artists from the Quattrocento Sienese School.

The counter-facade houses the remains of two 14th century sepulchers, as well as two large fragmentary frescoes from the former city gates of Porta Romana and Porta Pispini: an Incoronation of the Virgin by Sassetta and Sano di Pietro (1447–1450) and a Nativity by Il Sodoma (1531). Also visible is the ancient 15th century portal by Francesco di Giorgio Martini. Two notable works are St. Ludwig D’Angio at the Feet of Boniface VIII by Pietro Lorenzetti and The Martyrdom of the Franciscan Brothers in Ceuta by Ambrogio Lorenzetti. In the right transept is a 14th-century marble of St. Francis, from the ancient façade. The tomb of Cristoforo Felici, a magistrate of the Council of the Republic of Siena is located in the second chapel on the right of the choir.
Image by Gryffindor on Wikimedia under Creative Commons License.
Sight description based on wikipedia