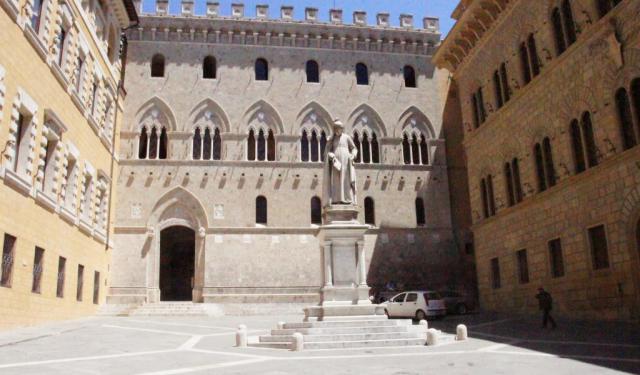 Image by Gerry Labrijn on Flickr under Creative Commons License.

While most Italian cities have a church on their main square, Siena's famous Piazza Del Campo gathers around the city hall, known as Palazzo Pubblico (literally the “Public Palace”) – symbol of rational government, and a tall municipal tower (open for climbers). If it's true that a society builds its tallest towers to its greatest gods, then it seems like the people of Siena worship secular effectiveness more than they trust in God. Other than being the seat of the municipal administration, this 13th-century building also plays host to an art museum.

A 14th-century urban fortress, remodeled in the 19th century with the triple mullioned windows inspired by Palazzo Pubblico, Palazzo Salimbeni is a neo-Gothic-style edifice flanking a piazza of the same name. The palace currently serves as the headquarters of Monte dei Paschi di Siena, the most ancient bank in the world, founded twenty years before Christopher Columbus discovered America.

Palazzo Tolomei (Tolomei Palace) – one of the oldest and most beautiful private residences in Siena; carefully restored in 1971.

Palazzo Chigi Saracini (Chigi Saracini Palace) – one of the most noble palaces in the city; home to a valuable private art collection and the prestigious Accademia Musicale Chigiana.

If you're keen to acquaint yourself with the palatial side of Siena more closely, take this self-guided walking tour.
How it works: Download the app "GPSmyCity: Walks in 1K+ Cities" from iTunes App Store or Google Play to your mobile phone or tablet. The app turns your mobile device into a personal tour guide and its built-in GPS navigation functions guide you from one tour stop to next. The app works offline, so no data plan is needed when traveling abroad.

The Salimbeni Palace is a 14th century fortress that flanks a piazza of the same name. The original structure was remodeled into neo Gothic style in 1879.

The Salimbeni Palace was built on the site of an earlier structure that dated back to 12th century. It was the residence of the Salimbeni family until they were driven out of the city in 1419. The city council then took over the building and sold it in 1866 to the Monte dei Paschi di Siena a major Italian bank. It now serves as the bank’s headquarters.

The Salimbeni Palace was at first an imposing medieval fort like structure with a Sienese Gothic architectural style. Giuseppe Partini remodeled it after the takeover by the Monte dei Paschi di Siena Bank and the size of the structure was enlarged. The battlements on the roof of the building and the arches below formed part of the original medieval structure.

In 1959, the building was renovated again to modernize the offices of the bank. After the takeover, Monte dei Paschi di Siena have added many works of art to the interior of the building including masterpieces by artists, Beccafumi, Pietro Lorenzetti and Sassetta. The bank holds many valuable documents about the economic history of Siena in its archives.

The Tolomei Palace is one of the oldest private palaces in Siena. It was carefully restored in 1971 and is one of the most beautiful among the grand residences of the city.

The Tolemei Palace was commissioned in the year 1208 for Jacopo di Rinaldo Tolomei. The Tolomeis were a wealthy banking family who traced their origins to Egypt. They were descendants of the kings of Egypt and came to Italy with Charlemagne. They received patronage from many churches in the city including the nearby church of St. Christopher. The family was driven out of the city in 1267 and their residence was damaged by the Ghibellines after the Battle of Montaperti. It was restored shortly after between the years 1270 and 1272.

The Tolemei Palace has a well preserved Gothic style stone façade that was typical of palaces in the 13th century. Two lines of elaborate double lighted windows look over a wide central portal. The large stone building has pointed arches and has two floors. The symbol of the Tolemei family consisting of three upright crescents and an upturned triangle is carved on the façade above the portal and above the two doors. The Tolemei Palace today houses a bank and several offices.
Image by Geobia on Wikimedia under Creative Commons License.
3

The Piccolomini Palace is a Renaissance-style palace. The palace was erected by Giacomo and Andrea Piccolomini, nephews of Pope Pius II. The designs were requested from Bernardo Rossellino. Construction proceeded between 1460 and 1495. The palace resembles the Medici Riccardi and Ruccellai Palace in Florence, with the rough ashlar block surface and mullioned windows. The sculptural additions were completed by Antonio Federighi and Urbano da Cortona.

The building now serves as a contemporary art gallery and museum. In the second floor, a terrace faces the roofs of the medieval town offering a great view of the Duomo, while on the highest point of the palace a rooftop loggia offers a view of the surrounding landscape.
Image by LigaDue on Wikimedia under Creative Commons License.
Sight description based on wikipedia
4

The Public Palace was completed in 1308 after being commissioned by the Council of Nine. It is a fine example of traditional Italian medieval architecture. The first floor is light-colored stone, and the upper floors are made of red brick. The facade is slightly curved inwards to reflect the curve of the Campo Square.

In the center of the facade, you will notice a round bronze plate. The Christogram plate was placed in 1425 to honor Saint Bernardino, whose sermons eased social unrest.

The triforate windows are an architectural specialty unique to Siena. The windows are divided with three arches resting on columns. Visitors will also notice the balzana, or coat of arms of the Town Council of Siena.

The attached bell tower, Mangia Tower, was completed in 1348. It stands at 102 meters, the same height as the Siena Cathedral. The height is also equal to the radius of the square. This was deliberate to show that the church and the state had equal power. The Mangia Tower has a gray upper loggia and a red brick base.

The Piazza Chapel was added in 1352 and features marble statues. The lower loggia was added to fulfill a promise that Black Death survivors made to the Holy Virgin. Visitors can climb the Mangia Tower for panaramic views of Siena.

The internal courtyard is decorated with the coat of arms of families who served on the Council of Nine. Here, you can enter the Civic Museum and see all the world-class frescoes.

The Public Palace is the crown of Campo Square and a great example of Siena's impressive architecture.

You can purchase a combined ticket to climb the Mangia Tower and visit the Civic Museum. Arrive early as the tower tickets sell out fast.
Image by Martin Stiburek on Wikimedia under Creative Commons License.
5

The Chigi Saracini Palace was built in the middle of the 12th century. At one time it belonged to the wealthy and influential Marescotti family. In 1506 it was purchased by Piccolomini-Mandoli who renovated its façade in a Renaissance style. In 1770 the building changed hands again and was purchased by the Saracini family who enlarged the façade in keeping with the line of the street and collected the works of art that adorn the interiors. The Chigiana Music Academy that now operates from the palace was established in 1932 and has produced many illustrious musicians like Carlo Maria Giulini, Salvatore Accardo and Claudio Abbado.

Guided tours are available around the academy today and visitors can view the art collection of Count Galgano Lucarini Saracini. The collection includes statues, bas reliefs, paintings, ceramics, artifacts made of precious stones, ivory and wood. It spans the Renaissance through the 18th century period, including paintings by Botticelli, Sodoma and Sassetta.
Image by MarkusMark on Wikimedia under Creative Commons License.
Sight description based on wikipedia