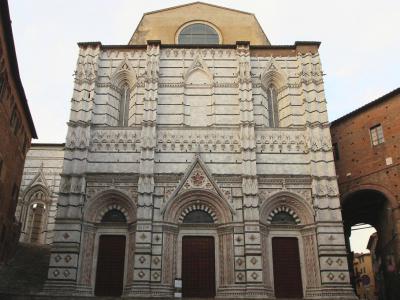 The St. John’s Baptistry is a religious building located on the square with the same name, in the back of Siena Cathedral. It was built between 1316 and 1325 by Camaino di Crescentino, a well known Sienese architect, whose son, Tino di Camaino, designed many notable buildings across Italy. The Gothic style façade is unfinished in the upper part, but don't let this fool you.

The interior of St. John’s Baptistry is filled with stunning artwork on the walls and ceilings that inspire awe and wonder at the craftsmanship. Made of bronze, marble and vitreous enamel, the baptismal font is one of the earliest masterpieces of Florentine Renaissance art. It was the work of Jacopo della Quercia. He also designed the shrine made of marble and created the statues of the five prophets in the niches and the statue of St. John the Baptist on the top.

Other pieces of art in the baptistery are by Giovanni di Turino, Ghiberti and Donatello. The frescoes adorning the walls are by the artist Vecchietta. He also painted two pieces found in the apse depicting the "Flagellation" and the "Road to Calvary".

The ticket to St. John’s Baptistry is included in the combination ticket of Siena Cathedral.
Image by LigaDue on Wikimedia under Creative Commons License.