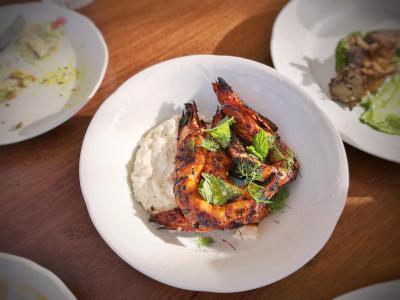 Bavel is a Middle Eastern restaurant in the Arts District. Sitting on a quiet corner in an old warehouse that still looks a little like a construction site, it is slightly removed from most of the action. The restaurant showcases the cuisines of Israel, Morocco, Turkey, and Egypt, though some critics characterize it as Israeli, paying tribute to its chef-owners’ heritages. Bavel was founded by an Israeli-American husband-and-wife team, for whom the name Bavel – the Modern Hebrew pronunciation of the biblical Babel – evokes a time when the Middle East was one because "Bavel is not specific to any one region."

The place is particularly well known for its hummus. Its Middle Eastern menu is mostly pumped-up versions of the classics, but the food isn’t quite traditional either. There’s hummus with duck ’nduja and foie gras with halva, and a lamb neck shawarma dish that’s so big it could be the only thing you order. Almost everything comes with some sort of pita, flatbread, or other carb vehicle to get food to your mouth, and all of them are fantastic. As a particular note, you should try their tagine.

The long and exciting menu – impossible to cover in a single visit – is livened up by the space itself, full of hanging from the ceiling vines that create sunny and party-like atmosphere even when you’re sitting down for your 10pm reservation, be it at the charcuterie counter, near the open kitchen or in one of the big round booths, or on a side patio that almost doubles the size of the restaurant.

Reputedly one of the most exciting restaurants in Los Angeles, this is the place that you don’t visit just once to get a portrait-mode photo before mentally crossing it off and moving on to the next one. Bavel is a restaurant that you will plot to return to again and again.

The restaurant has received positive reviews from critics both in L.A. and nationally, including The Los Angeles Times, Bon Appetit, Eater, Food & Wine, Los Angeles Magazine, and others. It has also been featured in The New York Times several times, The Boston Globe, and The Jerusalem Post, among others.
Image by T.Tseng on Flickr under Creative Commons License.