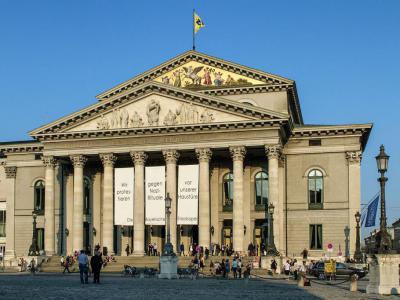 The Bayerische Staatsoper is the largest theater in Munich. It is located at Max Joseph Platz in the center of the city.

The Bayerische Staatsoper or Bavarian National Theater was designed by architect Karl von Fischer on the lines of the Odeon in Paris. It was commissioned by the Bavarian King, Maximilian I. The theater opened in 1818 with the performance of Ferdinand Fränzl’s, ‘Die Weihe.’ A fire damaged the structure in 1823 and a later reconstruction of 1825 was destroyed during the World War II bombings. The present theater opened its doors in 1963 with the performance of ‘Die Meistersinger von Nürnberg’ by Richard Wagner.

The present Bayerische Staatsoper is a large 21000 seat theater. Five rows of seats and a Royal box overlook a circular stage. Ballets, operas and operettas take place here every day. The annual Munich Opera Festival is hosted by the theater every summer. It has its own orchestra called the Bayerisches Staatsorchester and is also the home of the Bavarian State Opera and the Bavarian State Ballet. Visitors can take a conducted tour that lasts for an hour around the building and backstage at 2pm on most afternoons. The dates of the tour are published on the website of the Bayerische Staatsoper.

Why You Should Visit:
The 'Staatsoper' always has the top notch stars. Tickets are quite expensive but the overall experience is worth it.
There's a sense of occasion here that you don't always get at the opera or ballet. It's a perfect chocolate box theatre with helpful staff and comfortable seats. The interval refreshments are served quickly and are tasty.

Tip:
Opera or show at this place is a proper affair, so you should aim to make this a proper night out. People will be dressed up in suits and dresses.
Book your tickets early. If you also want a seat that has a view of the whole theatre setup, consider getting one near the front on the side and balcony, rather than front facing but at the back.
Image by Avda on Wikimedia under Creative Commons License.
Sight description based on wikipedia

Religion has been an important part of Munich's life for a long time and this is reflected in the city's numerous churches, chapels and cathedrals. During the 18th and the 19th century, many of them were reconstructed into Baroque and Rococo styles to represent the wealth and greatness of the city. This tour will take you to the magnificent religious edifices of Munich.

Kreuzviertel is one of the four quarters of Munich Alstadt. Historically here was located the centre of the clergy as there was a particularly high number of monasteries. Take this tour to admire the beautiful palaces and churches located in this area, and explore interesting shopping spots and museums.

Munich city is a shopper’s delight with departmental stores, large international brands and local boutique shops jostling for space. The main shopping areas are the Neuhauserstrasse and Kaufingerstrasse. The best part about shopping in the city is the bargains that you can get. German style competition ensures that the prices are reasonable. Pick up your favorites from traditional garments, beer...  view more