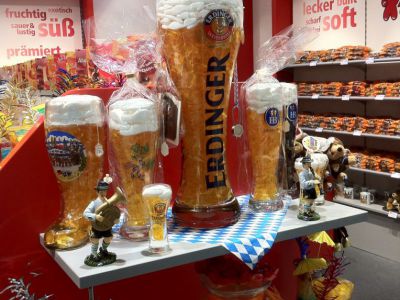 The Spiegel is a German magazine, and they have an international section online in English. In this section there is a sub-section called, “Germany Survival Bible,” and on March 24, 2006 they published an article entitled, “The Gummy Bear Obsession.” The byline says it all: “Want to make a German happy? Flowers and wine might be a good start. But to really win one over, consider a gift of sickly-sweet globs of sugary gelatin.” Bottom line--the Germans love their Gummy Bears.

Invented by Hans Riegel in 1922, the Haribo “dancing bear” was what first won the affection of millions of Germans. Even Albert Einstein loved them, and today they are given out for free in the cafeteria of the German parliament. The Association of the German Confectionary Industry reports that a German, on average, consumes 3.49 kilograms of gummy candy per year! In Munich there are several gummy bear stores for you to choose from, including one on the Sendlingerstrasse running between Sendlinger Tor and Marienplatz, which offers you bags of gummy bears for about 4 Euros. But in the Stachus Passage in the underground-station area of Karlsplatz (Stachus) there is a gummy bear store that sells German beer and cocktail glasses filled with gummy bears to make it look like they are filled with either golden beer or colorful beach drinks; these range in price from 7 to 20 Euros, depending on size.