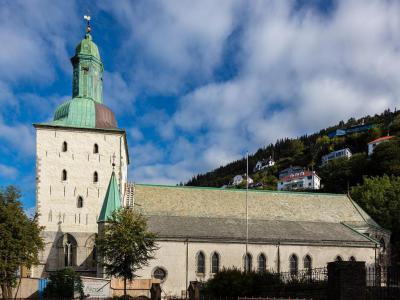 Since 12th century, Bergen Cathedral has been through the fire. Through the fire several times in fact, more than most, in a city famous for devastating fires. And to top it all off it has been hit by a cannon ball, which sticks in the wall to this day. Fires and wars, but there is peace and beauty inside.

Bergen Cathedral is episcopal seat of home parish of the Church of Norway. Word of the church appears for the first time in 1181. To this day it remains dedicated to Saint Olaf.

In 1181, Jon Kutiza, a peasant rebel and his men chased a number of King Sverre's men into the cathedral (then known as Olavskirken). Under the reign of King Haakon IV, Franciscans built a friary connecting to the church. The church had a long design in a Romanesque style. It burned down in 1248.

A new stone church was erected and that caught fire in 1270. The church wasn't fully reconstructed until 1537, when it was designated the new cathedral of the Protestant persuasion. In 1702 there was another fire and another reconstruction. By the 1880s the Cathedral's interior was restored to its original Rococo appearance.

In the second English-Dutch war, in the sea battle of Vagen in 1665, the cathedral sustained a hit from a cannon shot gone wild. The ball sits today, ensconced in the front wall.

The cathedral today is used mainly for musical events.
Image Courtesy of Wikimedia and Diego Delso.