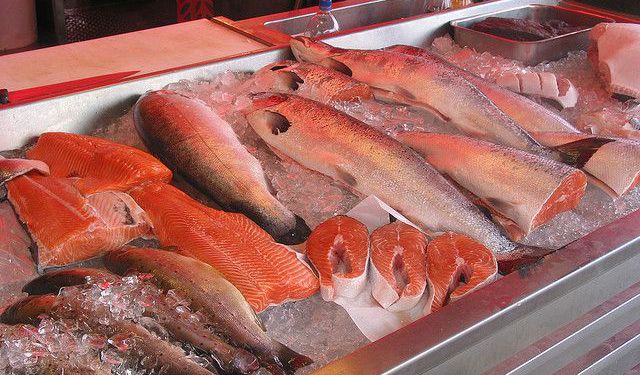 Bergen is probably one of the oldest shopping destinations in the northern Europe. For centuries, since its formation, the city has been a very important commercial hub. Today Bergen features a variety of shops and markets scattered around the city. The fact that Norway being an expensive country should not deter you from checking out the best shopping options in the city. Follow this self-guided tour to experience the best shopping in Bergen.
Image Courtesy of Flickr and 아침놀.
How it works: Download the app "GPSmyCity: Walks in 1K+ Cities" from iTunes App Store or Google Play to your mobile phone or tablet. The app turns your mobile device into a personal tour guide and its built-in GPS navigation functions guide you from one tour stop to next. The app works offline, so no data plan is needed when traveling abroad.

Kjottbasaren is Bergen's old meat market, founded in 1872. Just to the north of the Fish Market on Torget Street, is an ornate gabled brick building with a crenelated roof. This is Bergen's Kjottbasaren Market and food emporium. Originally specializing in meats, it now offers fruits and vegetables as well.

One can shop and dine here. Weather permitting, there will be tables and chairs in front of the cafe/restaurant. Be wary of the wind direction when digging into your waffles. The smell of fish from the neighboring fish market may put you off your feed.

Inside the market one is hemmed in by stalls selling chocolates, cheeses, meat, cakes and breads and souvenirs. The market was built in 1872 and restored in 1990. There are restaurants on the first floor and more stalls and shops above.

Nestling between the fjords and the seven mountains of Bergen, is the city's Fish Market. Besides fish and seafood, the market offers local farm products and fruit and vegetables. The restaurants, no surprise, sell a plentiful amount of seafood. The indoor market is open all year. The outdoor market opens in May for the summer.

The Fish Market has been in operation since 1200. It has always been a vital meeting place for fishermen, farmers, merchants and citizens. Fish are sold not only from shops in the Market, but also directly from boats at the quay.

The Fish Market was not always at the same location. The original market was next to Bryggen in the Nikolaikirkeallmanning. With the arrival of the Hanseatic League in the 14th century, the city became distinctly Germanic. In 1541 it was proposed strongly to move the market to keep the market free of Hanseatic influence.

Finally, in 1556 the Market was successfully moved to Vagen. The Market was then the central trading area of Bergen. In 2012 the indoor Fish Market was opened. The shops inside became permanent and business proceeded all year. The Market is now located at the inner harbor of Bergen, in the center of the city, easy to find.

Norway has a long convoluted coastline, stretching all the way to the Arctic. The fishing industry is extremely important to the local economy. Bergen is the the most active harbor in Norway with a busy and colorful fish market. It should not be missed.

Why You Should Visit
"Why the fish alone are with the trip!"
Image Courtesy of Flickr and Paul Arps.
3

The old days are not missed so much in Bergen, Norway. The city had a lot of wooden buildings, close together and narrow streets. Fires would break out with alarming regularity. Flames easily roared from one house to another, leaping across streets and engaging whole neighborhoods.

Something had to be done. The answer was "allmenninger", or rebuild vulnerable districts. Widen the streets and create squares between districts to stop the spread of fires. Torgallmenningen is Norway's "best designed town square."

It is near impossible to move around Bergen and not cross Torgallmenningen once or twice. Shops and malls line the square. Roofs of glass before the store facades protect shoppers from the all too frequent rains.

The Maritime Monument, with statues of Norwegian sea rovers, is at one end of the Square. These hardy sailors get no protection from the rain, but they don't mind. After all, it's only water.

"We'll meet at the blue Stone" is an expression often heard in Bergen, The Blue Stone is just that; a large blue stone that casts a spell. It is located at the intersection Of Torgallmenningen and Ole Busll Plass. It's a great place to meet.
Image Courtesy of Wikimedia and Fingalo.
4

Named in honor of Oscar I, King of Norway and Sweden, in 1857. Prior to that date this street had a host of other names. It has been "shoemaker street", "tailor street", "hospital street", "St. Jacobs street", "Potrgaden", and "Domkirkegaden."

The street is narrower than most others in Bergen. At the south-eastern end is the old city gate of Bergen. A number of significant buildings line the street. At No. 67 King Oscars Street is Zander Kaae's Foundation, built in the 18th century for a charity and now it rents rooms to students.

St. Jorgen's Hospital was an 18th century leprosy hospital and now it is a leprosy museum. This is a sign that leprosy is down, an improvement, count your blessings. Next to the museum is Danekert Krohn's Foundation, another 18th century charity, this one for the elderly.

The street has its share of schools. There is Bergen katedralskole (cathedral school), one of three secondary schools on King Oscar Street. There are also Danielsen videregaende skole, and Tanks videregaende skole.

A visit to King Oscars Street reveals a side of Bergen, hidden from ordinary sight. It is like a secret place, away from the chain shops and popular hang-outs. There are plenty shops and restaurants but they all have a personal style and charm that comes with the street.
Image Courtesy of Wikimedia and Linguaddict.