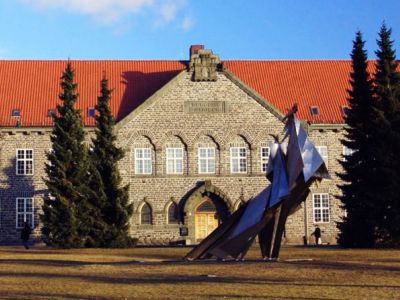 Back in the Middle Ages, Bergen was one of the key centers of literacy in Norway, with monasteries and churches containing most of the available books. One such collection belonged to St Mary's church. In 1766, the church's vicar donated a good portion of its collection, along with some money, to set up a proper public library, predecessor of today's BPL.

In 1876, the church's books were entirely handed over to the library and kept there until deposited in the University Library of Bergen – about a century later. Shortly before that, in 1871, the BPL collection was replenished with another 12,000 volumes acquired from the university librarian Paul Botten-Hansen. By that time, the library's first building – a former brewery – had proven too small and so the institution had to relocate to the meat market.

In the early 1900s, the need for a purpose-built, modern edifice became particularly acute. Efforts to obtain such came to a fruition in 1906, when a pertinent architectural competition was launched, won by Olaf Nordhagen. The architect designed a new neo-Romanesque building, which was erected in 1917. Currently, the main office of Bergen Public Library (note: it has six more district branches) is a protected property.
Image by Nina Aldin Thune on Wikimedia under Creative Commons License.
Sight description based on wikipedia