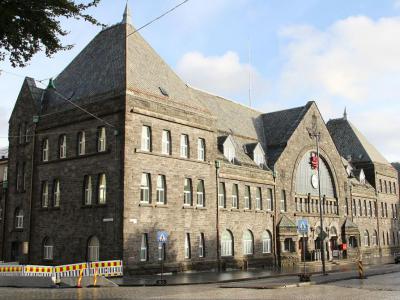 Nestled right in the heart of Bergen, the local railway station is one of the busiest and grandest transport hubs in all of scenic Norway. For those rolling into town from Oslo by train this building represents a culmination of one of the world's most beautiful train rides. Indeed, Bergen Railway Station, apart from its technological efficiency, sparkles interest from an architectural standpoint as well.

The station was opened in 1913, four years after the Oslo-Bergen rail link had become operational, and replaced the town's former railway station located further west. It was designed by the well-known Norwegian architect, Jens Zetlitz Monrad Kielland, in the so-called National Romantic manner, reflecting a mix of more heavyset Medieval-inspired style with the modernist jugendstil (Art Nouveau) – the popular Northern European trend at the time.

Most vividly, this style is presented in the main hall, where the heavy stone walls are offset by the elegant roof and glass windows which show off the station’s, perhaps, most precious asset – a view to the mountains!

Back in the 1920s and 30s, the building attracted much attention as a HoReCa venue. In 1922, there was the Hotel Terminus established nearby, and in 1937, a restaurant inside the station. As of 2003, the building has been protected against any non-trivial modifications.
Image Courtesy of Wikimedia and Bjoertvedt.
Sight description based on Wikipedia.