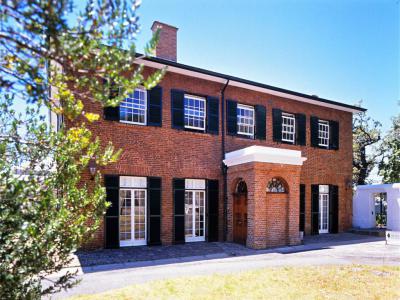 The Bertram House stands at the corner of Orange Street and Government Avenue Gardens.

Due to the strong Dutch influence in Cape Town, it is easy to forget that the British held the area several times during South Africa’s history, and Bertram House is a house museum which will show you how a wealthy British family lived in a country far from their own.

You should perhaps note that at the time of the British rule in the region, the settlers were, on the most part, military, trading or mining families who came from the British working or middle classes. Compared to the locals, these families were the nouveau riche and some of them modeled their homes on the grand houses they had dreamed about owning.

Bertram House was built in the Georgian style and is one of the last surviving buildings of its kind in the Cape area. It was built in 1839 by John Baker and its British owners lived there until 1903. When they left the country, it was bought by the South African College and taken over by the government in 1930.

The house was saved from demolition by the determination of Winifred Ann Lidderdale, a member of the South African Cultural History Museum, who insisted that it should be made into a house museum.

Restored to its former beauty, the house museum is furnished with English Georgian furniture and beautifully decorated in light colors. The 364 pieces of Chinese and English porcelain are from the personal collection of Mrs. Lidderdale.