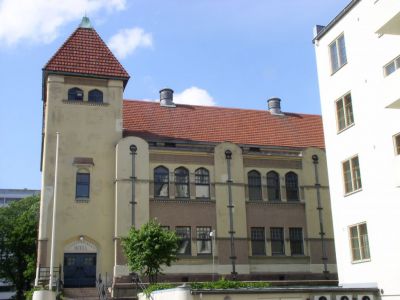 Betel Church is located in the VII District of Turku, Finland. It is a church of the Turku adventism parish. The jugend style church was completed in 1906 according to the plans of Frithiof Strandell. It was later renovated according to the plans of Erik Bryggman in 1927 and has a functional bell tower, among other things. The church is actually quite hidden from pedestrians. In recent years, there have been suggestions to open up a walkway from Yliopistonkatu to Puutarhakatu for pedestrians, thus allowing them to better admire the church. The Betel Church is listed among the most noted buildings of the cultural environment in Finland. In addition to regular services, the church has the vegetarian restaurant KASVIS-ravintola, which serves a lunch buffet. The restaurant uses organic and locally grown produce and also has vegan options.
Image by Antti Bilund on Wikimedia under Creative Commons License.
Sight description based on wikipedia