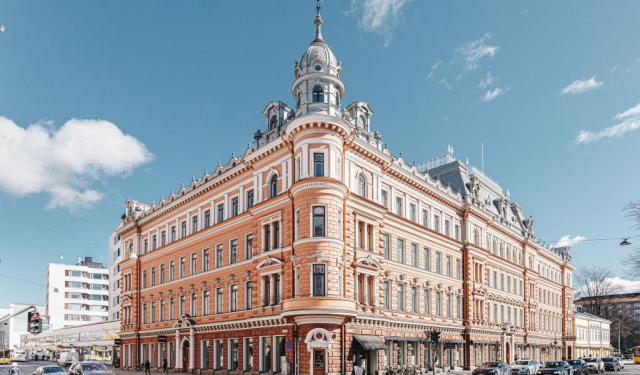 The oldest city in Finland, Turku has numerous, attractive old buildings that catch the eye and leave you with a great memory of your stay in this charming city. Each of the prominent landmark constructions of Turku tells its own story. Take the following walking tour to discover the architectural jewels of Turku.
How it works: Download the app "GPSmyCity: Walks in 1K+ Cities" from iTunes App Store or Google Play to your mobile phone or tablet. The app turns your mobile device into a personal tour guide and its built-in GPS navigation functions guide you from one tour stop to next. The app works offline, so no data plan is needed when traveling abroad.

Åbo Svenska Teater is a Finland-Swedish theatre and the oldest theatre in the country, founded in 1839. The building itself is also the oldest still functioning theatre house in Finland. The name means "The Swedish theatre of Åbo"; Åbo is the Swedish name of the city of Turku.

The theatre has been located in its present building since 1839, when it was opened with the play Gubben i Bergsbygden the 21 January 1839. During the 19th century, the theatre did not have a permanent staff, as Finland did not have any native actors at this point; the actors consisted of travelling Swedish troupes, which toured both Sweden and Finland, of which one of the most notable was the troupe of Pierre Deland, which performed regularly on this theatre in the 1840s and 1850s. The first native actors performed in the theatre in 1872, though it was not to be until 1894, that the first complete troupe entirely of native actors performed here.

Image by Kalajoki on Wikimedia under Creative Commons License.
Sight description based on wikipedia
2

The country’s old tradition of having numerous market halls in almost any town is reflected in the architectural landscape of Finland. Dating back to the end of the 19th century, Finland’s Market Hall has a beautiful, ornamented, red brick façade, contrasting beautifully with the modern Hansa shopping center located by the Hall. Inside, there are two corridors packed with stalls that are endowed with a large variety of gastronomical products.
Image by Samuli Lintula on Wikimedia under Creative Commons License.
3

Settled in the heart of the city next to City Hall, Turku City Office is another must-see attractive building thanks to its eye-catching architectural features. Turku City Office structure is a fine example of Art Nouveau architectural style - an international movement and style of art and architecture that became popular at the end of the 20th century.
Image by Markus Koljonen on Wikimedia under Creative Commons License.
4

Turku City Hall is a Neo-Renaissance building located on the bank of the Aura River in Turku.

It was originally designed by Charles Bassi from 1810-1811 as the restaurant Seurahuone. The building survived the Great Fire of Turku in 1827. It was redone 1879-1883 as the city hall under plans by F. A. Sjöström.

The first floor used to have the register office of Turku up until 1975 and Turku district court until 1997. After the district court of Turku moved to the new Turku courthouse, the first floor was replaced by work, meeting and legislative spaces in 1999. The second floor of the building is decorated with gold and massive crystal crowning. The wing of the building, located on Aurakatu 4, is for city council groups' rooms and travel agency services.

The public can enter the building during specific events such as Turku Day. The public is also permitted to witness the city council assembly.


Image by Markus Koljonen on Wikimedia under Creative Commons License.
Sight description based on wikipedia
5

Katedralskolan i Åbo (The Cathedral School of Åbo) is the Swedish-language senior high school.

The school was presumably founded in 1276 for education of boys to become servants of the Church.

The current schoolhouse was built after the conflagration of Turku in 1827. In the 1970s Svenska klassiska lyceum and Åbo svenska flicklyceum, The Swedish Girls' Secondary School of Turku, were united and the old school name Katedralskolan i Åbo, the Cathedral School of Turku, was revived.

In 1977, the introduction of the comprehensive school system in Turku also caused the transferral of the Katedralskolan to the City of Turku.
Image by © Samuli Lintula on Wikimedia under Creative Commons License.
Sight description based on wikipedia
6

The Brinkala Mansion is a beautiful building best known for the tradition of public declaration of Christmas peace; it started here in 1886 from the balcony of the mansion that is known as the Christmas peace balcony. The origins of the mansions date back to the 16th century when it was a town house and a hotel. Today the mansion’s courtyard is home to various events such as the Medieval Market.
Image by Kalajoki on Wikimedia under Creative Commons License.
7

Former Police Station, Cultural Center and City Library, Hjelt Mansion is a lovely two-storey stone complex built in 1830, a few years after the Great Fire of Turku. Impressive Ionic columns and the Greek temple style of ornamental details remind us of ancient Roman and Greek landmark buildings.
Image by Kalajoki on Wikimedia under Creative Commons License.
8

Settled in the Cathedral Square, Akatemiatalo or Old Academy Building is another fine example of neo-classical architectural style. The Swedish King Gustav IV and the Queen were present when the foundations of the building were laid in 1802. Built by Swedish architect Carl Gjorwell for the Royal Academy of Turku, this unpretentious yet still impressive building is today’s Ceremonial Hall of University of Turku and Abo Academi University.
Image by © Samuli Lintula on Wikimedia under Creative Commons License.
9

Vartiovuori observatory is the former observatory of the Royal Academy of Turku. Building was completed in 1819 and designed by German architect Carl Ludvig Engel. By its style, the neoclassical observatory is typical work of Engel and it has obvious similarity to Helsinki University Observatory and Pulkovo Observatory (in St. Petersburg, Russia), which are as well Engel's work. Building is located on top of the Vartiovuori hill, close to the cathedral and Aura river and it's well visible from many places in city center.

The observatory and several wooden houses (current Luostarinmäki Handicrafts Museum) on the hill were saved from the Great Fire of Turku 1827. Observatory is famous for a note made by German astronomer Friedrich Wilhelm Argelander:

"Here the observations were stopped by a horrible fire which burn the whole city into ashes but, thanks to God, left the observatory intact".
Image by Markus Koljonen on Wikimedia under Creative Commons License.
Sight description based on wikipedia