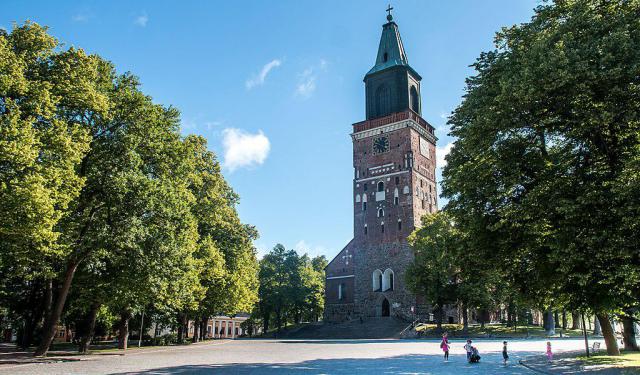 The city of Turku is a home to a number of lovely tourist attractions and landmarks fit to make anyone's visit to the city a pleasant holiday experience. This tour will take you to some of the most prominent sights of Turku.
Image Courtesy of Wikimedia and Gary Bembridge.
How it works: Download the app "GPSmyCity: Walks in 1K+ Cities" from iTunes App Store or Google Play to your mobile phone or tablet. The app turns your mobile device into a personal tour guide and its built-in GPS navigation functions guide you from one tour stop to next. The app works offline, so no data plan is needed when traveling abroad.

Image Courtesy of Wikimedia and LPfi.
Sight description based on Wikipedia.
2

Image Courtesy of Wikimedia and Markus Koljonen.
Sight description based on Wikipedia.
3

Yliopistonkatu (literally "University Street") is a 1,5-kilometer-long street located in the city center of Turku, running parallel to the Aura River, starting at Kutomonkatu and ending at Koulukatu. Since 2001, the part of Yliopistonkatu between Aurakatu and Humalistonkatu, which is about four hundred meters long, has been a pedestrian street. The area of the current pedestrian street has been Turku's Christmas street since 1948. The Turku Market Square is also located along Yliopistonkatu.

Yliopistonkatu is one of the streets in the town plan designed by Carl Ludvig Engel after the Great Fire of Turku. The street was formerly known as the "Russian Church Street" (Venäjän Kirkkokatu) according to the Church of the Holy Martyr Empress Alexandra located along it. In February 1924, the street was named Yliopistonkatu in the building of the former Phoenix Hotel along it, which had been operating since 1922 at the University of Turku. Other options for the street were Kustaa Aadolfin katu and Vapaudenkatu, but Yliopistonkatu took the win.

After the university moved to Yliopistonmäki (literally "University Hill") in 1955, initiatives have been taken by the Nomenclature Committee to transform Yliopistonkatu into Mannerheiminkatu, Leningradinkatu or Göteborginkatu. However, the name has remained the same.
Image Courtesy of Wikimedia and Användare.
Sight description based on Wikipedia.
4

The country’s old tradition of having numerous market halls in almost any town is reflected in the architectural landscape of Finland. Dating back to the end of the 19th century, Finland’s Market Hall has a beautiful, ornamented, red brick façade, contrasting beautifully with the modern Hansa shopping center located by the Hall. Inside, there are two corridors packed with stalls that are endowed with a large variety of gastronomical products.
Image Courtesy of Wikimedia and Zache.
5

The Pharmacy Museum is settled in the Qwensel House, the oldest bourgeois house in Turku, built in 1700. In the 19th century, there was a pharmacy in the shop wing of the house. The pharmacy museum has herb and material rooms and an office area that includes Finland's oldest pharmacy and two laboratories. The museum exhibits fascinating Åke Lydman's collections of pharmacy tools. A pharmaceutical research laboratory and exhibition of history of medicine-making can also be found here.
Image Courtesy of Wikimedia and Bysmon.
6

The Old Great Square (Finnish: Vanha Suurtori, Swedish: Gamla Stortorget) is a medieval market square located in the city centre of Turku. It is located in the II District in very close proximity to Turku Cathedral. The area was the administrative and commercial centre of Turku since the founding of the city in the 13th century up until the Great Fire of Turku.

Today, there are buildings alongside the Old Great Square, but only on the southern side because the blocks on the northern side changed to Porthaninpuisto after the fire. There are four historical buildings which the City of Turku restored for cultural use: the Brinkkala Mansion, Old Town Hall, Hjelt Mansion and Juselius Mansion. The buildings were mainly constructed after the fire and represent neoclassicism.

Old Town Hall. It is assumed that the City of Turku administrative centre was headquartered at the Old Town Hall since the 14th century. It was destroyed by the fire of 1827, along with its bell tower. The building was redone into a three story factory in 1899, which was active until the 1920s. In 1932, the building was acquired by the City of Turku, and was for police department use. Nowadays, it is a space for galleries and a banquet hall and concerts.

Hjelt Mansion is the only remaining stone building in Finland which clearly represents the St. Petersburg empire style. The Mansion was taken over by the City of Turku in the 1930s, at which time both stories were used by the police department. After this, the downstairs level was a used as the children's and young adult's section of Turku City Library, and the Turku Cultural Centre worked in the upstairs level.

The new renaissance Juselius Mansion is the newest of the buildings in the area. It was built by Carl Fredrik Juselius in 1892, originally as his home. It has been a residential building for city officials, space for the police department and a dociros office. Nowadays, the building is used for other purposes, such as the legendary restaurant Teini.
Image Courtesy of Wikimedia and Kalajoki.
Sight description based on Wikipedia.
8

The cathedral was originally built out of wood in the late 13th century, and was dedicated as the main cathedral of Finland in 1300, the seat of the bishop of Turku. It was considerably expanded in the 14th and 15th centuries, mainly using stone as the construction material. The cathedral was badly damaged during the Great Fire of Turku in 1827, and was rebuilt to a great extent afterwards.
Image Courtesy of Wikimedia and Gary Bembridge.
Sight description based on Wikipedia.