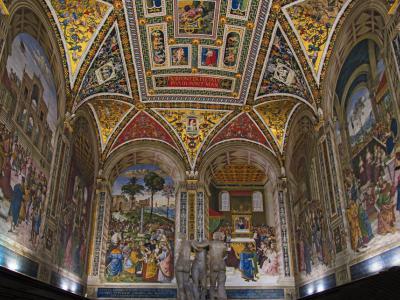 The complete trove of manuscripts was never transferred to the library; however, several hand-painted texts from the 1400s are on display. The main draw of the library is the remarkable frescoes.

The frescoes are the star of the library. The frescoes were created by Pinturicchio and assisted by 21-year-old Raphael. The walls are divided into ten scenes depicting an important part of Pope Pius II's life. Painted columns frame each scene. Each fresco is meticulous, with luxuriously clothed figures and vibrantly colored backgrounds. Scenes include the Pope's time as ambassador to European courts, paying respects to the new Emperor, mediating the marriage of Emporer Frederick III and Eleonora of Aragon, and becoming Cardinal and then Pope.

In the center of the room, visitors will find a gorgeous copy of The Three Graces. The Three Graces are based on an ancient statue from the Hellenistic Period (fourth to second century BC).

Remember to look up; the ceilings are intricately painted.

The frescoes are remarkably well-preserved. Art lovers will relish seeing work created by Pinturicchio and young Raphael. The frescoes tell the story of a powerful Siena family, the Piccolomini's, and focus on the life of the most famous Piccolomini, Pope Pius III.

There are several hidden gems to search for. Pinturicchio and Raphael painted themselves into the scene showing the canonization of St Catherine. Raphel is wearing red stockings, and Pinturicchio is wearing a red cap. Visitors should also notice the half-moons. The half-moon was the Piccolomini family symbol and is hidden everywhere in the frescoes.
Image by Mal B on Flickr under Creative Commons License.