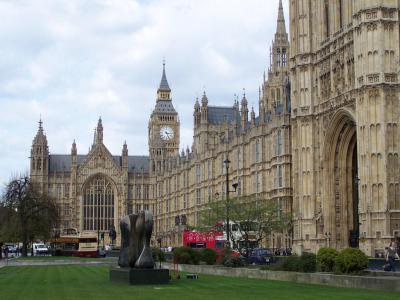 Commonly known as Big Ben, this iconic tower is one of the dominant objects on the London skyline. At the top, there is a four-faced Great Clock with five bells, the largest of which is called Big Ben, not the tower itself, and it weighs a staggering 15 tonnes!!! This grand bell tolls every hour, while the smaller bells chime every quarter past the hour.

Up until 2012, the tower was officially known as the Clock Tower but was then renamed to Elizabeth Tower for the Queen's Diamond Jubilee. Some say, the Big Ben label relates to Benjamin Hall who supervised the bell installation, while others reckon it had something to do with the heavyweight boxing champion of that time, Benjamin Caunt. Either way, Big Ben is a cultural icon and its Victorian mechanism signals precise timing to everyone in Britain including members of Parliament who occupy the adjoining Westminster Palace.

Also known as Houses of Parliament, this palace accommodates the House of Lords and the House of Commons. Ironically, after the Old Westminster Palace burned down in 1834, the British Parliament could have ended up in Buckingham Palace, as proposed by King William IV who, in reality, simply didn't like the property himself and wanted to get rid of it. The MPs, however, found Buckingham not quite suiting their purpose and rejected the offer, sticking with the good old Westminster.

Today, the House of Commons is a regular news-maker and its sittings draw much attention, particularly Prime Minister's Questions on Wednesdays. Both the Commons and the Lords are regularly open to visitors and have public viewing galleries. To attend Parliament sessions, one has to request a free ticket from their MP or stand in a live queue outside, which is often simpler. There's tight “airport-style” security at the entrance, scanning belongings, taking off and inspecting shoes, belts and other metal objects of visitors. It doesn't take as long as at the airport, though.

Tip:
If politics isn't one of your prime interests and your only care for Westminster for its architectural splendor, you may simply take a memorable photo of Big Ben and Houses of Parliament from a distance, at the nearby Westminster Bridge some 500 yards away.