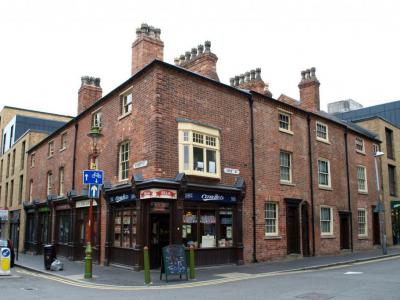 Following the industrial revolution in Britain, there were great migrations of landless people flocking to the cities for work. Birmingham, always the foremost city of industry, built thousands of so-called back-to-back houses to accommodate the influx. The houses were overcrowded and built around shared courtyards, "back-to-back."

Also known as British terraced housing, the back-to-backs were declared unsatisfactory. No more such housing was built after the Public Health Act of 1875. They were replaced by byelaw terraced houses that were not much better.

The back-to-back houses were two to three stories high. They were found mostly in depressed inner-city areas of Birmingham. In the early 1970s most of the back-to-backs had been demolished. Many tenants were moved to council houses and flats. Most of them however settled in housing estates.

The combination of two houses back to back and sharing a common yard was referred to as a "court." Many of the courts were occupied by workers who worked at home in specialized tasks. They labored at such things as button making, glasswork, woodwork, and leather tailoring. There were also skilled trades including jewelry.

Overcrowding was common. In Court 15 for instance, now on display, there had been over 500 families. (Not all at one time, naturally.)

This type of housing remained in use until 1966. The buildings were finally declared unfit for human habitation and the tenants were forced to leave.

Heating would come from fireplaces, water from a pump in the yard, and sanitary needs from an outhouse. All things considered, perhaps the tenants did not mind leaving.

Why you should visit
To see how far ordinary people have come and appreciate the blessings we enjoy.
Image by NotFromUtrecht on Wikimedia under Creative Commons License.