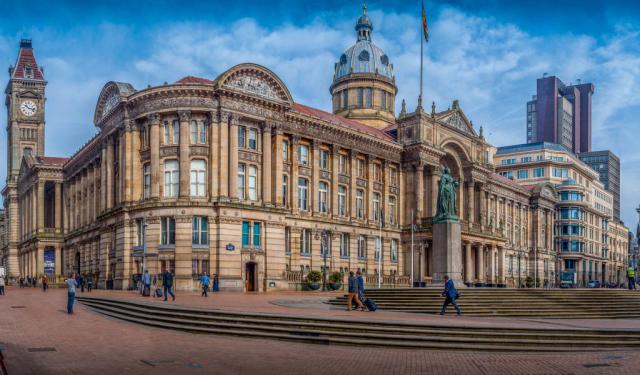 Image by Brian Clift on Wikimedia under Creative Commons License.

The main city of England’s West Midlands and one of the centres of the country's Industrial Revolution, Birmingham is a vibrant metropolis with no shortage of old-time and new landmarks to behold. Starting from the Town Hall in Victoria Square, marking the city center, down to the easily recognizable BrindleyPlace and other notable attractions along the way, you'll enjoy your stay in Birmingham fuller if follow this orientation walk and learn more about the past and present of this wonderful city!
How it works: Download the app "GPSmyCity: Walks in 1K+ Cities" from iTunes App Store or Google Play to your mobile phone or tablet. The app turns your mobile device into a personal tour guide and its built-in GPS navigation functions guide you from one tour stop to next. The app works offline, so no data plan is needed when traveling abroad.

Centenary Square in Birmingham is a public square named so in 1989 for the centenary of Birmingham becoming a city. Previously, this was an industrial area filled with small workshops and canal wharves up until the 1920s when it was bought by the city council to create a grand civic centre comprising museums, council offices, cathedral and opera house. That project, however, had to be abandoned due to World War II, seeing only the Hall of Memory and half of the planned Baskerville House brought to completion. In 1991 the square was remodeled in tune with the new International Convention Centre, featuring new paving resembling a Persian carpet, railings and lamps, a fountain and several sculptures, including the controversial sculpture called "Forward" by Raymond Mason. Later, in 2013, during the construction of the Library of Birmingham, several of the 1991 design elements had to be removed to give way to a library amphitheatre. Today the square serves as a major cultural venue, hosting events like seasonal markets, arts festivals, commemoration services, New Year's Celebrations and, during Christmas, a temporary ice rink and Ferris wheel.
Image by Andy G on Wikimedia under Creative Commons License.
2

Image by Oosoom on Wikimedia under Creative Commons License.
Sight description based on wikipedia
3

Image by Oosoom on Wikimedia under Creative Commons License.
Sight description based on wikipedia
4

The town hall is famous for its concert pipe organ. Originally installed in 1834 by William Hill with 4 manuals and 70 stops, this was subject to many rebuilds and alterations, all by William Hill, until a restoration by Willis in 1932. By 1956 the organ had been enlarged to 90 stops.
Image by Erebus555 on Wikimedia under Creative Commons License.
Sight description based on wikipedia
5

Birmingham Museum and Art Gallery (BM&AG) is a museum and art gallery.

Entrance to the Museum and Art Gallery is free, but some major exhibitions in the Gas Hall incur an entrance fee. It has a collection of international importance covering fine art, ceramics, metalwork, jewellery, archaeology, ethnography, local history and industrial history.

The Art Gallery is most noted for its extensive collections of paintings ranging from the 14th to the 21st century. They include works by the Pre-Raphaelite Brotherhood and the largest collection of works by Edward Burne-Jones in the world.

The collection of antiquities includes coins from ancient times through to the Middle Ages, artefacts from Ancient India and Central Asia, Ancient Cyprus and Ancient Egypt. There is material from Classical Greece, the Roman Empire and Latin America. There is also mediaeval material.
Image by G-Man on Wikimedia under Creative Commons License.
Sight description based on wikipedia
6

It was renamed on 10 January 1901, to honour Queen Victoria, and a statue of her was erected and unveiled. She died just 12 days later.
Image by Cristian Bortes on Wikimedia under Creative Commons License.
Sight description based on wikipedia
7

Birmingham City Council House in Birmingham, England is the home of Birmingham City Council. It is located in Victoria Square in the city centre and is a Grade II* listed building. The side of the building, which faces Chamberlain Square, is the entrance and façade of the Museum and Art Gallery which is partly housed within the same building. Above the main entrance, which faces Victoria Square, is a mosaic by Salviati Burke and Co. of Venice. On 9 August 1902, The Council House, along with the Town Hall, was illuminated in celebration of the coronation of King Edward VII.
Image by Elliott Brown on Wikimedia under Creative Commons License.
Sight description based on wikipedia
8

17 & 19 Newhall Street is a red brick and terracotta Grade I listed building on the corner of Newhall Street and Edmund Street in the city centre of Birmingham, England. The building was designed in 1896 by Frederick Martin of the firm Martin & Chamberlain. Originally having the postal address of 19 Newhall Street, it was built as the new Central Telephone Exchange and offices for the National Telephone Company and is popularly known as the Bell Edison Telephone Building - the NTC logo behind the wrought iron gates to the main entrance includes those names.
Image by Oosoom on Wikimedia under Creative Commons License.
Sight description based on wikipedia
9

The Cathedral Church of Saint Philip is the Church of England cathedral and the seat of the Bishop of Birmingham. St Philip's was built in the early 18th century in the Baroque style by Thomas Archer and is located on Colmore Row, Birmingham, England.The cathedral is a Grade I listed building. St Philip's is surrounded by a churchyard; six of the monuments there have heritage listings, including one commemorating two men who died during the construction of Birmingham Town Hall and a memorial to the victims of the Birmingham pub bombings.
Image by G-Man on Wikimedia under Creative Commons License.
Sight description based on wikipedia
10

The New Street is located right in the Birmingham City Centre and is the shop avenue, where fashion boutiques and stylish kiosks attract the most exquisite tastes. If you appreciate brands, quality and affordable prices, you should definitely choose New Street Shops.
Image by G-Man on Wikimedia under Creative Commons License.
11

The church of St Martin in the Bull Ring in Birmingham is a parish church in the Church of England. It is the original parish church of Birmingham. It stands between the Bull Ring shopping centre and the markets. The church is a Grade II listed building. The current Rector is the Revd. Canon Stewart W. Jones. The roof shows the influence of the great hammerbeam roof of Westminster Hall. The beams are decorated with fine tracery and end in large carvings of angels. The floor tiles are Victorian Minton and display the quartered arms of the de Bermingham family.
Image by Sunil060902 on Wikimedia under Creative Commons License.
Sight description based on wikipedia
12

The Bull Ring is a major commercial area of Birmingham. It has been an important feature of Birmingham since the Middle Ages, when its market was first held. It has been developed into a shopping centre twice; first in the 1960s, and then in the 2000s. The site is located on the edge of the sandstone city ridge which results in the steep gradient towards Digbeth. The current shopping centre is the busiest in the United Kingdom with 36.5 million visitors in 2004, and is also the twelfth largest. The Bullring Shopping Centre was masterplanned and designed mainly by Benoy. The shopping centre consists of two main buildings which are connected by an underground passage lined with shops and is also accessible from St Martin's Square via glass doors.
Image by Sunil060902 on Wikimedia under Creative Commons License.
Sight description based on wikipedia