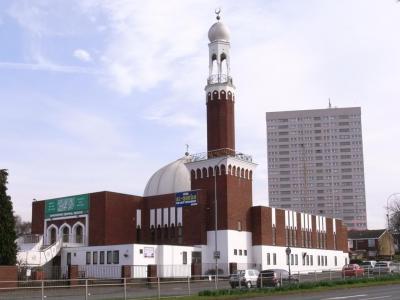 Birmingham Central Mosque is a mosque in the Highgate area of Birmingham, England, run by the Birmingham Mosque Trust, and is one of the largest Muslim centres in Europe. The mosque is open to people of all religious affiliations, men and women, and its main prayer halls currently hold between 3,500 and 4,000 people during a Friday service. Since the mosque's establishment, it has become a focal point for the Birmingham Muslim community, providing education for children and adults, lectures and seminars, counselling and a marriage bureau along with sporting and recreational activities and workshops.