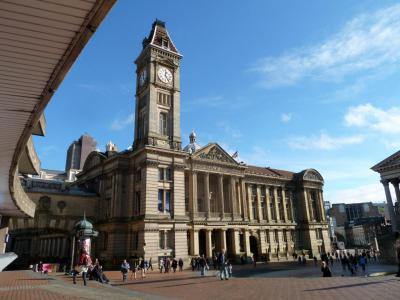 In 1829 the Birmingham Society of Artists opened a private exhibition venue on New Street. The Factory Act of 1833 initiated government funding for education. In June 1880, Allen E. Everitt became the curator of the Free Art Gallery, the precursor of the Birmingham Museum and Art Gallery.

The Prince of Wales officiated at the opening of the new Museum and Art Gallery in 1885. The building occupied the Council House, above the Gas Department (gas was a coming thing in the 1880s). Elaborate metalwork covered both the interior and exterior of the building, including the impressive cast-iron columns in the main gallery space.

The most stand out features of the exterior were the clock tower and the high portico and a pediment demonstrating Birmingham's contributions to the arts. The main entrance is in Chamberlain Square under the clocktower, referred to locally as "Big Brun." The entrance hall plaque reads, "By the gains of Industry we promote Art."

The Arts promoted by Industry include the Gallery collections, ranging from the 14th to the 21st century. The Gallery holds works by the legendary Pre-Raphelite Brotherhood, including the largest collection of paintings by Edward Burne-Jones.

Schools of art expression in oils in the Gallery are: The English School, with Gainsborough, Hogarth, Turner, and Constable; the Flemish School; the French School; Impressionists Degas, Pisarro, and Renoir. German, Italian and Spanish artists are also represented.
Image by JimmyGuano on Wikimedia under Creative Commons License.