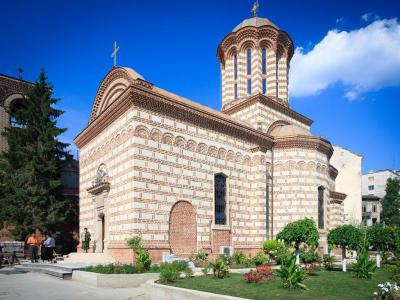 Old Court Church is the oldest church in Bucharest, founded by Mircea Ciobanul, during his first reign, between 1545-1554. The building served for two centuries as a place of coronation of the lords of Wallachia. The church is dedicated to the Annunciation and St. Anthony.

The Serbian-style trefoil building was influenced by the church of the Cozia monastery. The narthex has an almost square shape, with large windows on the N and S facades, being covered with a cylindrical vault. The nave supports by arch the tower placed on a circular drum inside and with 12 sides outside. The tower is vaulted with a spherical cap. The passage between the narthex and the nave is made under a double arch. The altar has two flanking apses, the proscomidia and the diaconicon.

For the construction of the church, the buttress with a constructive role was used for the first time in Wallachia, under Moldovan influence. The façade is made of exposed brick in 3 horizontal rows and two bricks placed vertically on the plastered strips. At the top, under the cornice, a row of exposed brick windows. The cornice is made of saw-shaped bricks. The base is made of concave bricks placed on the edge. The entrance frame dates from 1715.
Image Courtesy of Wikimedia and Mihai Petre.
Sight description based on Wikipedia.