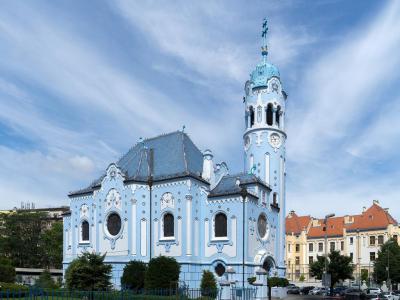 The Hungarian Secessionist Catholic Church, known as the Church of St. Elisabeth or the Blue Church, is located in Old Town Bratislava. The construction was consecrated to Elisabeth of Hungary, who was a princess and, later, became a Roman Catholic saint. She was widowed young and surrendered her wealth for a life devoted to the poor and indigent. After her death at the age of 24, many miracles of healing were accredited to her. She was canonized by Pope Gregory IX in 1235.

Built in 1908, the structure was designed by Odon Lechner, a recognized Hungarian architect. He was known to embellish his constructions with Zsolnay tile patterns. Zsolnay tiles were manufactured by a Hungarian company known for its intricate porcelain, tiles, stoneware and pottery. The tiles on the church’s roof were generated using the pyrogranite process, which involves firing ceramic under exceptionally high temperatures, producing resilient materials which are resistant to acid and frost. The structure has attained its name because of the blue color of the mosaics, which decorate its roof and walls.

The building features a cylindrical tower and bell dome common to the Hungarian Art Nouveau and the Romanesque movement in art and architecture. The single nave church contains vaulted ceilings along with hints of barrel vaults. Romanesque double pillars encompass the entrances and the windows.
Image Courtesy of Wikimedia and Thomas Ledl.