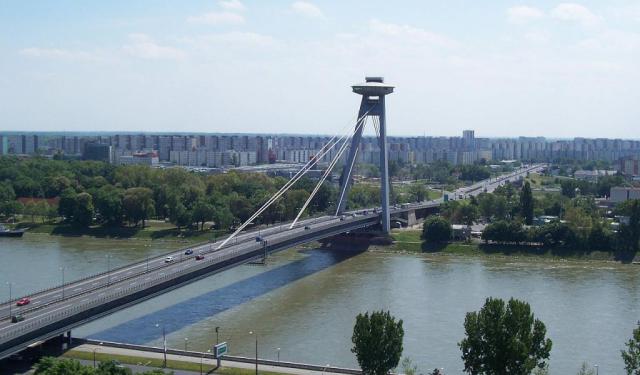 Image by Dima Sergiyenko on Wikimedia under Creative Commons License.

Owing to the fact that the Danube Road connected Western Europe with the Orient, Bratislava, the capital of Slovakia, has always been influenced by European art and culture. Visitors to the city can admire its Gothic and Baroque architecture, along with the splendid 20th century buildings. Don't miss the chance to explore Bratislava's great architectural variety!
How it works: Download the app "GPSmyCity: Walks in 1K+ Cities" from iTunes App Store or Google Play to your mobile phone or tablet. The app turns your mobile device into a personal tour guide and its built-in GPS navigation functions guide you from one tour stop to next. The app works offline, so no data plan is needed when traveling abroad.

1) National Council of the Slovak Republic

The National Council of the Slovak Republic adjoins the magnificent Bratislava Castle. It is located on the castle hill, in Alexander Dubček Square. The construction took place in the times of Socialism, when the Slovak Republic was part of then Czechoslovakia. The architectural style chosen for the National Council is typical for the Soviet era parliament building.
Image by Roman Jurík on Wikimedia under Creative Commons License.
2

Bratislava Castle is the huge rectangular fortress with four corner towers, standing atop a rocky hill directly above the river Danube right in the middle of Bratislava. Strategically positioned to ensure safe passageway between the Carpathians and the Alps, for many centuries it had guarded crossing over the Danube at the intersection of the old central European trade routes – most notably the amber route – running from the Rhine River valley and the Baltic Sea down to the Balkans and the Adriatic Sea. In good weather the Castle allows outstanding view of not only Bratislava, but also the neighboring Austria and Hungary. Many legends are associated with the Castle, which has found place in the historical and cultural heritage of both Hungarians and Germans, due to its connection to Hungary and the Hapsburg monarchy.
Image by Christopher Walker on Wikimedia under Creative Commons License.
3

If there's anything unmistakably Bratislavan to recognize the city, it is definitely the Nový Most bridge across the Danube. This is the only bridge in the world to be included in the World Federation of Great Towers and the longest cable-supported suspension bridge of its kind - the first asymmetrical bridge ever built. It was completed in 1972 and was originally named the Bridge of the Slovak National Uprising; today however it is more commonly referred to as simply the New Bridge. Made of steel, it fascinates onlookers mostly with the oval, UFO-like thing above its asymmetrical pylon, which in fact houses a restaurant. Apart from its cuisine, this restaurant – flying 95 meters above the bridge – is popular for the sweeping views it provides. If you ever wish to visit this restaurants, you'd have to take an elevator.
Image by DDima on Wikimedia under Creative Commons License.
4

Part of the Comenius University system, the University Library is the largest research collection in the region. The institution was first opened in 1919 and is located in the pedestrian center of the historic part of Old Town, near the old City Hall, Austrian Embassy and St. Martin's Cathedral. Over the years, it has served as a major part of the academic milieu of Comenius University but, it has also served as the national library for Bratislava up until 1954. The library houses major pieces of research including legal, historical, classic and scientific documents. The facility currently holds over 2.5 million publications from Slovak and foreign literature. Because of its academic affiliation, the college has entered into several scholastic associations with organizations including the International Federation of Library Associations and the Association of European Research Libraries. It functions as a dissertation registry, library depository, NATO depository, administrator of Slovak union catalog and conservator of document restoration. The library houses one of the widest-ranging English language collections in the world. It is open to the public throughout the year. Tours are free of charge. However, library services for students and the public have a variety of prices depending on the services required.
Image by Peter Zelizňák on Wikimedia under Creative Commons License.
5

The Old Town Hall of Bratislava is an excellent example of Gothic architecture and was originally built in the 1300s. It stands between Main Square and Primate’s Square (or Primaciálne námestie) and was originally designed to accommodate soldiers guarding the fortress surrounding the medieval town. During the Renaissance period, the building underwent transformation after being damaged by earthquake and then fire. Its beautifully tiled roof now serves as the city's landmark. In the course of the centuries the building had been used as a prison, mint, market, archive and arsenal until it finally accommodated a Town Hall. Today it houses the Bratislava City Museum, featuring a collection of historic artifacts including cannonballs, dungeon instruments of torture and antique weaponry. A cannonball, embedded in the wall, resulted from the invasion of the Napoleonic troops in the early 1800s.
Image by Martin Proehl on Wikimedia under Creative Commons License.
6

The Trinitarian Church of Bratislava is also known as the Church of Saint John of Matha and Saint Felix of Valois. Located in the Old Town of Bratislava, the church is chockfull of fantastic Baroque features. The structure was erected on the original location of the first St. Michael’s Church in 1717, after almost 200 years following the destruction of the St. Michael’s settlement during the Ottoman wars. Many of the components found in the design of the building were influenced by features of the St. Peter’s Church in Vienna, the sister city of Bratislava. With its awe-inspiring vaulting and unbelievable frescos, this is categorically a must-see for those who appreciate architecture. The altar was manufactured by A.G. Bussi. The main feature of the construction is the altarpiece showing St. John of Matha and St. Felix of Valois ransoming prisoners, while the statues of St. Agnes and St. Catherine flank the altar. Over the years, the great hall of the church has played host to various prominent composers who held concerts for the public, including Johannes Brahms and Franz Liszt. The building has served as a secular and sacred facility with everything from church services to political events being facilitated within its walls.
Image by Frettie on Wikimedia under Creative Commons License.
7

A member of the European System of Central Banks, The Slovak National Bank Building is home to the Central Bank of Slovakia. The structure is one of the tallest buildings in Bratislava and opened its doors to the public in 2002. The building has 33 stories with 3 underground levels. It has 23 elevators and the capacity to hold 1,000 people. The Central Bank opened for business in 1993 under the authority of the Slovakian government. The financial institution is the body that is accountable for the economic transactions of the nation. The bank has 9 regional branches throughout the country. It is charged with the responsibility of making monetary policy, issuance of euro banknotes, financial stability and foreign exchange operations. The organization also supervises and monitors the financial markets. The organization oversees three important sections under the umbrella of the department of statistics which are critical to the daily operation of the Slovakian financial markets. They are the foreign exchange, banking statistics and general statistics. These departments are responsible for monitoring the pecuniary values and financial trends globally and, regulating the financial markets based on these analyses. Visitors to the city will want to explore the building and learn about the European financial markets.
Image by Frettie on Wikimedia under Creative Commons License.
Sight description based on wikipedia
8

Known for its odd upside down pyramid structure, the Slovak Radio Building is unique and a worthwhile part of a sightseeing tour of Bratislava, Slovakia. This upside down construction was erected during the socialist years of Slovakia, prior to the fracture of Czechoslovakia. The building was designed by renowned architects Š. Svetko, Š. Ďurkovič and B. Kissling. Located on Mýtna ulica (street), the Slovak National Broadcasting Studio has several theaters and recording studios which have been used by musicians and musical groups from around Slovakia. It took 15 years to build and represents a combination of cement and steel framework. The first broadcast from the building was in 1984. The concert hall, which is quite spacious, holds one of the largest organs within the nation. Slovak Radio is adjacent to Freedom Square and is close to the very tall Slovak National Bank building. The section of the city where it stands is the more contemporary part of the city. The building is only open to the public when musical performances and concerts are happening. The rest of the time, the facility is used by the Radio network for broadcasting purposes.
Image by Frettie on Wikimedia under Creative Commons License.
Sight description based on wikipedia