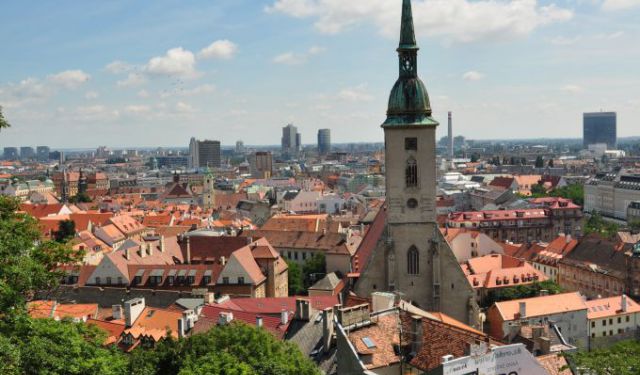 Image by xlibber on Flickr under Creative Commons License.

Slovakian capital Bratislava straddles the river Danube right at the Austrian and Hungarian border. The closeness of these two countries has had its toll on the city's long and often tumultuous history in which the Austrians, Croats, Czechs, Germans, Hungarians, Jews, Serbs and Slovaks have played their role. It wasn't until 1919 that the city, prior to that known as Pressburg, got its contemporary name. This walk covers some of the most prominent sights of the historic part of Bratislava.
How it works: Download the app "GPSmyCity: Walks in 1K+ Cities" from iTunes App Store or Google Play to your mobile phone or tablet. The app turns your mobile device into a personal tour guide and its built-in GPS navigation functions guide you from one tour stop to next. The app works offline, so no data plan is needed when traveling abroad.

Bratislava Castle is the huge rectangular fortress with four corner towers, standing atop a rocky hill directly above the river Danube right in the middle of Bratislava. Strategically positioned to ensure safe passageway between the Carpathians and the Alps, for many centuries it had guarded crossing over the Danube at the intersection of the old central European trade routes – most notably the amber route – running from the Rhine River valley and the Baltic Sea down to the Balkans and the Adriatic Sea.

In good weather the Castle allows outstanding view of not only Bratislava, but also the neighboring Austria and Hungary. Many legends are associated with the Castle, which has found place in the historical and cultural heritage of both Hungarians and Germans, due to its connection to Hungary and the Hapsburg monarchy.

Image by Kurayba on Flickr under Creative Commons License.
2

St. Martin’s Cathedral is the oldest and largest cathedral in the area. The history of it is long and closely associated with the Austro-Hungarian royals who used it as a coronation church. Emperors and Empresses such as Leopold I, Maximilian II, Rudolf II, Matthias, Elisabeth Christine and Maria Theresa where all crowned here. The massive spire of the cathedral dominates the city’s skyline reinforced by the bold Gothic features. The incredible stained glass windows also deserve mention.

The Cathedral's bell tower displays replica of a Hungarian Crown, while the alter features a massive statue of St. Martin on horseback dressed up in Hungarian regalia, sculpted by Georg Rafael Donner in 1744. Just as many other buildings of that period, the cathedral has survived several fires. Each time it burned down, the ensued reconstruction brought in a mix of new architectural styles which are now visible all over the place. Inside the chapel there are catacombs holding the remains of many prominent Austo-Hungarian historic figures laid down to rest.

Image by Diego Delso on Wikimedia under Creative Commons License.
3

If there's anything unmistakably Bratislavan in the city, it is definitely the New Bridge across the Danube. This is the only bridge in the world being included in the World Federation of Great Towers. It is the longest cable-supported suspension bridge of its kind and the first asymmetrical bridge ever built. Completed in 1972, it was originally named the Bridge of the Slovak National Uprising. Today it is simply referred to as the New Bridge.

Made of steel, it fascinates onlookers mostly with the oval, UFO-like platform above its asymmetrical pylon. The platform in fact houses a restaurant. Apart from flying 95 meters above the bridge, the restaurant is popular for the sweeping views of the city. If you ever wish to visit this restaurant, you'd have to take an elevator.

Image by Ank Kumar on Wikimedia under Creative Commons License.
4

Hviezdoslav Square is all about music. Mainly this is due to the presence of two grand music venues, the old Opera House and Slovak Philharmonic, and the open-air music stage for pop, folk and jazz. The square bears the name of Slovakia's prominent poet, Pavol Ország Hviezdoslav, whose monument stands right here. The square is a popular spot with the locals who love to come here for a walk or to sit in the nearby park, particularly in summer, and enjoy the greenery, fountains, as well as numerous pubs and cafes surrounding the place. In winter the place is just as popular due to the Christmas market that provides great festive atmosphere.
Image by Jorge Láscar on Wikimedia under Creative Commons License.
5

The Hungarian Secessionist Catholic Church, known as the Church of St. Elisabeth or the Blue Church, is located in Old Town Bratislava. The construction was consecrated to Elisabeth of Hungary, who was a princess and, later, became a Roman Catholic saint. She was widowed young and surrendered her wealth for a life devoted to the poor and indigent. After her death at the age of 24, many miracles of healing were accredited to her. She was canonized by Pope Gregory IX in 1235.

Built in 1908, the structure was designed by Odon Lechner, a recognized Hungarian architect. He was known to embellish his constructions with Zsolnay tile patterns. Zsolnay tiles were manufactured by a Hungarian company known for its intricate porcelain, tiles, stoneware and pottery. The tiles on the church’s roof were generated using the pyrogranite process, which involves firing ceramic under exceptionally high temperatures, producing resilient materials which are resistant to acid and frost. The structure has attained its name because of the blue color of the mosaics, which decorate its roof and walls.

The building features a cylindrical tower and bell dome common to the Hungarian Art Nouveau and the Romanesque movement in art and architecture. The single nave church contains vaulted ceilings along with hints of barrel vaults. Romanesque double pillars encompass the entrances and the windows.
Image by Thomas Ledl on Wikimedia under Creative Commons License.
6

Primate's Palace (or Primacialny palac as they call it) was created between 1778 and 1781 by architect Melchior Hefele for the Archbishop of Bratislava József Batthyány. The palace is famous for its Hall of Mirrors that has hosted many historic events over the centuries, including the signing of the fourth Peace of Pressburg in 1805 after the Battle of Austerlitz which effectively ended the War of the Third Coalition.
Image by LMih on Wikimedia under Creative Commons License.
7

The Old Town Hall of Bratislava is an excellent example of Gothic architecture and was originally built in the 1300s. It stands between Main Square and Primate’s Square and was originally designed to accommodate soldiers guarding the fortress surrounding the medieval town. During the Renaissance period, the building underwent transformation after being damaged by earthquake and then fire. Its beautifully tiled roof is now one of most recognizable city's landmarks.

In the course of the centuries the building had been used as a prison, mint, market, archive and arsenal until it finally became a Town Hall. Today it houses the Bratislava City Museum, featuring a collection of historic artifacts including cannonballs, dungeon instruments of torture and antique weaponry. One cannonball is of particular interest to visitors. You can find it embedded in the tower wall. It has been there since 1809 during bombardment of the city by the invading Napoleon troops.
Image by Pudelek on Wikimedia under Creative Commons License.
8

Main Square (or Hlavne Namestie) is the center of the Old Town and a home to several key historic local landmarks, namely: the Stará Radnica (Old Town Hall) and the Roland Fountain. The Old Town Hall was partially built in the 14th century; its highlight is undoubtedly the clock tower that is visible from all over the city. The nearby Maximillian Fountain features a 10,5 meter statue of Roland the knight, protector of Bratislava. Legend has it that every New Year at a stroke of midnight, the statue – otherwise facing the new Town Hall – turns around and bows toward the Old Town Hall building. The latter is also quite famous for having a cannonball stuck in its wall, fired by the advancing Napoleonic troops back in 1809. The bronze statue of Napoleon himself, leaning over a bench, is also located nearby.
Image by Jorge Láscar on Wikimedia under Creative Commons License.
9

9) Michael's Tower and Street (must see)

Michael’s Gate is one of the last pieces of medieval architecture in Bratislava and a gateway to the Old Town that was once surrounded by a massive fortified wall. That fortress had four gates in each direction. St. Michael’s Tower was part of the northern entrance and was built around the year 1300. In 1758, it was remodeled with the added baroque features and the statue of St. Michael and the Dragon placed at the top where it still remains.

Michael's Gate was the centerpiece of a larger fortification system which included two rings of city walls, two bastions, a barbican and a drawbridge over the water moat.

Today, the Tower holds an exhibition of old weapons. Apart from the weaponry, visitors to the Tower can also enjoy a magnificent view of the city opening from the top. Down below at the Michael's Street, visitors will be greeted with a variety of high-end stores and restaurants.
Image by Fred Romero on Flickr under Creative Commons License.
10

Obchodná Street is the main shopping artery of Bratislava and one of the busiest streets of the city. It stretches from St. Michael's Tower in the north to Kollárovo Square in the south. Initially it was named Schöndorfs Street after the Schöndorf suburb that used to be located nearby. Many oldest houses here date back to the 18th century. The area grew popular after the World War I when a large number of merchants and craftsmen came to set up shops here.

Today, Obchodna street is a buzzing thoroughfare full of shops and restaurants. Not far from the Crown Plaza Hotel it intersects with Post Street which is another popular street much loved by the locals. Post Street is a pedestrian zone.
Image by Stefan Wisselink on Flickr under Creative Commons License.