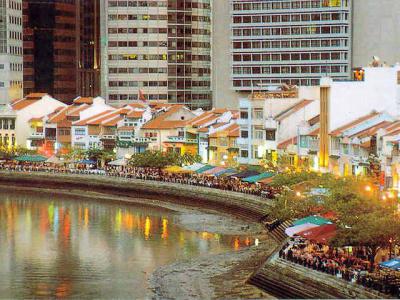 The historic Boat Quay in Singapore, upstream from the mouth of the Singapore River was once the busiest part of the city's old port – a true center of commerce handling three-quarters of all shipping business back in the 1860s. Because the southern part of the river resembles the belly of a carp, which according to Chinese belief is where wealth and prosperity lay, many shop-houses were built in the area, making it quite crowded.

Although maritime trade is no longer Boat Quay's primary role, the shop-houses here remain and now, carefully conserved, accommodate colorful restaurants, bars and shops of various sort. Thus the area's social-economic role has shifted towards tourism seeing the commercial zone enclose the Singapore River. As such, this is an example of successful urban regeneration, given that in the early 1990s the area was derelict.

It is here, in the Boat Quay, that you will find the most atmospheric riverfront restaurants serving all manner of Singaporean delicacies. There are also German, Indian and Korean foods on offer, as well as heaping plates of seafood to choose from; or, if you just want to watch the boats go by with a pint, that is perfect either. On top of that, visitors get a scenic view of the Financial District and the river and, with such a stunning location, it is good to walk along the shore on a nice balmy night, too.

Tip:
Before ordering food in the Boat Quay, just make sure to ask about the price or pre-agree it, as many things here are charged per 100 grams and you may end up paying exorbitant prices at some restaurants! Keep in mind that if you venture just a little further down the road, to one of the more local street food venues, you might get just as richly rewarded for a smaller bill.
Image by Shiny Things on Wikimedia under Creative Commons License.

It would be a pity to leave Singapore without having explored its specialty shops and bringing home something truly original. We've compiled a list of gifts and souvenirs, which are unique to Singapore, that a visitor might like to purchase to reflect their visit.

For centuries, the island city-state of Singapore has been a melting pot of Asian cultures: Chinese, Indian, Malay and Arab, prompting men and women from various parts of the continent to come and make it their home. Legacy of that fusion lives on today in the harmony of a multicultural society, making Singapore a one of a kind tourist destination which offers visitors a truly unforgettable...  view more