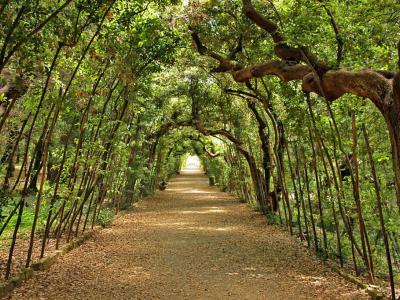 The Boboli Gardens is one of the most elegant gardens in Florence. Sitting just behind the Pitti Palace, they are said to have been the first few gardens of the 16th century – built for the wife of Cosimo I of Medici, Eleonora di Toledo – involving many renowned landscape architects of the time.

One of them, Niccolo Tribolo worked the gardens till his death in 1550, upon which the job was taken over by Bartolomeo Ammanati and Bernardo Buontalenti both credited with the invention of the so-called Mannerist style that succeeded the Renaissance period in Florence. Replete with long axial developments, wide gravel avenues, a considerable stone element, lavish employment of statuary and fountains, and a proliferation of detail manifested in the classical accents such as grottos, nymphaea, garden temples and the like, the Boboli Gardens thus represent an ideal showcase of the Mannerism in all its diversity. The openness of the garden, with an expansive view of the city, was also rather unconventional for the period and served as the prototype which inspired many European royal gardens, especially Versailles.

Over the years, the Boboli Gardens have undergone large-scale reconstructions as a result of which they now cover an area of approximately 11 acres of land – or 4,5 hectares. They are also often looked upon as an open-air museum displaying art, sculptures and antiquities dating back to the Roman era through the 16th-17th centuries.

Whenever you may want to take a break from it all – noise, crowds, queues – just to be surrounded by natural beauty, this is the place. 10 euros on the door may seem like a steep price, but if you pack your picnic and stick around for a while so as to soak up the atmosphere to the maximum, you will see where all the money goes. It takes some stamina to get around the garden as it is quite hilly and sometimes lots of stairs too, but in return, you will get some truly terrific views of the city, plus the numerous pretty discoveries along the way. There are several recommended walking paths in the garden to match everyone's abilities. At the end, you can take the northern exit to visit Fort Belvedere or the south-western one to visit La Specola which houses the Museum of Zoology and Natural History. The choice is always yours!

Tip:
Entry is included in the FirenzeCard and you don't need to queue if you have the card; go straight to the bookshop inside the Pitti Palace to gain access.
A full exploration will take approximately 2 hours – bring some snacks, water and good shoes.