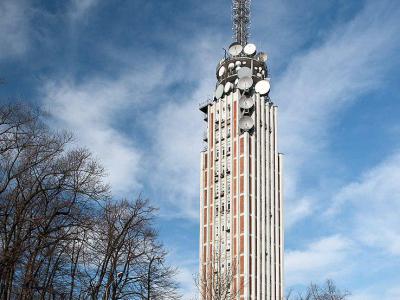 The Borisova Gradina TV Tower or the Old TV Tower is a 106-metre tall (including the aerial) TV tower in the garden Borisova Gradina in Sofia. It is known as the tower used for the first Bulgarian National Television broadcasts in 1959.

The tower was designed by architect Lyuben Podponev, engineer A. Voynov and technologist Georgi Kopkanov. Construction began in December 1958 and the tower was officially opened on 26 December 1959. It has an area of 144 m², 14 floors and three platforms. In 1962 the Borisova Gradina TV Tower was the place from which the first Bulgarian VHF radio broadcast (of the Bulgarian National Radio's Programme 1) was realized. Since 1985 the newer Vitosha Mountain TV Tower has mainly been used for television and radio broadcasting in and around Sofia and the Old TV Tower largely remains as a historic landmark.
Image by Nenko Lazarov on Wikimedia under Creative Commons License.
Sight description based on wikipedia