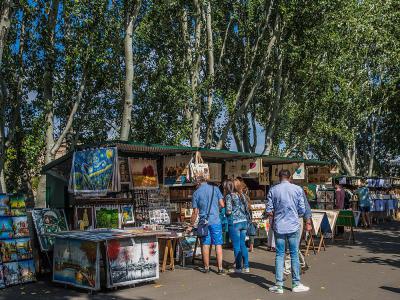 The Seine is “the only river in the world that runs between two bookshelves,” they say. If you walk by the Seine, you may find proof to that in the form of large green boxes set along the river banks, hitched tight to the sidewalk walls, largely contributing to the overall romantic image of bohemian Paris since as early as the 16th century. Remarkably though, the bouquinistes, owners of these boxes, obtained official recognition themselves only in the 1970s.

For the most part, the contemporary Paris bouquinistes sell posters, stamps, maps, magnets, and whatever else the tourists might love. Some say the best souvenir bargains in Paris are found at the bouquinistes. Their main specialization, however, is books. Here you can find some really good stuff printed in French (and not only) and, unless you are restrained in terms of luggage, you can get yourself a few books, either used or brand new, at a really reasonable price. In fact, for as little as few euros, you can find all the French literature classics here!

Regulated by the municipal authorities, these stalls are generally open from around 11am until sunset. Subject to weather, though, these hours may vary. If it's snowstorm or pouring rain, they will hardly work at all. But once the sun is out, the bouquinistes eagerly put their merchandise on display and await passers-by to stop by and give them, at least, a little bit of a chit chat...
Image by Ninara on Wikimedia under Creative Commons License.