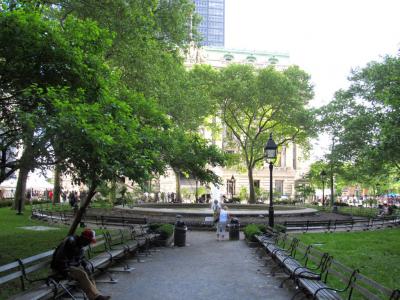 Located near New York City's financial district, Bowling Green Park is a crescent-shaped fenced-in garden – the oldest public park in the city – whose benches and tables are much favored a lunchtime destination for the financial district workers. As if attesting to this is the charging bull statue of the New York Stock Exchange, found within the park, symbolizing financial hope.

Originally, this is the place where on May 24th, 1626 the Dutch Governor, Peter Minuit, bought Manhattan for as little as $24 worth of trinkets, thus rendering it the birthplace of the Dutch fort of New Amsterdam, precursor of New York City. For some time afterwards, the area served as a cattle market and was then turned into a parade ground with a large statue of King George III, made of lead, set in its midst. During the War of Independence, the statue was torn down and the lead was used to make patriot bullets. The original 18th century fence surrounding the park saw some action too when New Yorkers, enflamed with patriotic fervor, marched down Broadway to Bowling Green and ripped the gilded crowns from atop the fence posts.

During the time when New York was briefly the nation’s capital, George Washington made the city his home, precisely the Alexander Macomb House at 39-41 Broadway, at the northern tip of Bowling Green, where he resided for one year in 1790 with his family until the capital was moved to Philadelphia. Prior to that, for a short while in 1775, he also stayed in a home beside the park and reportedly enjoyed and frequented the park on his way home.

As a popular ground for lawn bowling, at some point Bowling Green saw many elegant houses mushroomed in the vicinity, gradually turning it into a promenade for the wealthy. In 1850, the park was thrown open to the general public, and in 1939 was manicured for the World’s Fair. After years of neglect that followed, Bowling Green Park was restored in 1970 and improved further in 1990.
Image Courtesy of Flickr and Ken Lund.
Sight description based on Wikipedia.