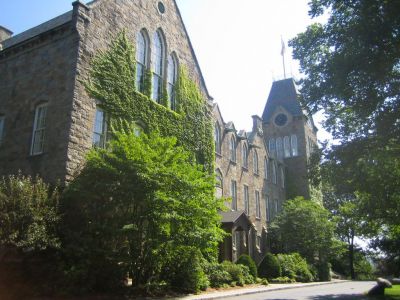 Worcester Boynton Hall is the main building of the Polytechnic Institute. WPI consistently ranks as a tier-one (top 25%) university according to U.S. News & World Report. The main building was raised in 1865 by the notorious tinware manufacturer, John Boynton. The edifice was designed by Stephen Carpenter Earle, one of Worcester’s most remarkable and creative architects in the nineteenth century. Later, his son, Rear Admiral Ralph Earle, became the president of the Institute and headed it until his death. Boynton Hall is built of pure granite in Gothic revival style.
Image by Nicholas LeCompte on Wikimedia under Creative Commons License.
Sight description based on wikipedia