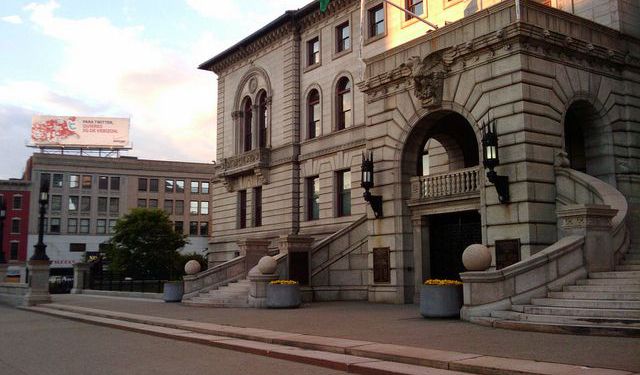 Take a walk through the center of Worcester and enjoy admiring the architectural aspects of the main tourist attractions like the City Hall, Union Station, Tuckerman Hall, Lincoln Memorial Auditorium and other remarkable architectural jewels of this corner of New England.
Image Courtesy of Flickr and sapienssolutions.
How it works: Download the app "GPSmyCity: Walks in 1K+ Cities" from iTunes App Store or Google Play to your mobile phone or tablet. The app turns your mobile device into a personal tour guide and its built-in GPS navigation functions guide you from one tour stop to next. The app works offline, so no data plan is needed when traveling abroad.

Built around 1900, the Worcester Bancroft Tower commemorates the memory of George Bancroft who was born just below on Salisbury Street. Secretary of the Navy, Founder of the U.S. Naval Academy, and U.S. Minister to Great Britain and Germany, he also was a friend of Stephen Salisbury III's family. Salisbury III funded the tower's construction. Bancroft Tower was designed by Stephen C. Earle and C. Fisher and features Romanesque Architectural Style elements. The cost of construction was roughly $15,000. It serves as a place for outdoor recreation. Bancroft Tower is listed on the National Register of Historic Places.
Image Courtesy of Wikimedia and Anatoli Lvov.
2

Worcester Boynton Hall is the main building of the Polytechnic Institute. WPI consistently ranks as a tier-one (top 25%) university according to U.S. News & World Report. The main building was raised in 1865 by the notorious tinware manufacturer, John Boynton. The edifice was designed by Stephen Carpenter Earle, one of Worcester’s most remarkable and creative architects in the nineteenth century. Later, his son, Rear Admiral Ralph Earle, became the president of the Institute and headed it until his death. Boynton Hall is built of pure granite in Gothic revival style.
Image Courtesy of Wikimedia and Nicholas LeCompte.
Sight description based on Wikipedia.
3

Intended as the residence of the Worcester Woman’s Club, Tuckerman Hall was constructed in 1902 on a lot donated to the Club by Stephen Salisbury III. The building bears the name of Mr. Salisbury's grandmother, Elizabeth Tuckerman. It was designed by Josephine Wright Chapman, one of the most famous architects of the time. The hall serves as a multipurpose venue, housing important community events like concerts, lectures, weddings and musical performances. The construction represents a mixing of stylistic elements taken from Georgian, Federal, and even Greek Revival sources and is considered to be one of New England's architectural treasures because of its symmetrical and elegant aspect.
Image Courtesy of Wikimedia and Daderot.
4

Image Courtesy of Wikimedia and John Phelan.
Sight description based on Wikipedia.
5

5) Our Lady of Fatima Parish

Our Lady of Fatima was formerly a worship house that offered spiritual support to Roman Catholic and Lutheran congregations. It was built in 1910 and is constructed of granite. In 1950 the Diocese of Worcester purchased it and set up Our Lady of Fatima Church to serve the Catholic community of the town. At present Our Lady of Fatima gathers together 1500 families.

The objectives of the church are to create opportunities for spiritual education, social meetings and projects. The building has neo-Gothic revival architectural features and is an impressive sight for tourists.

Image Courtesy of Wikimedia and Arnold Reinhold.
Sight description based on Wikipedia.
7

Worcester City Hall was built by the Norcross brothers at the end of the 19th century, replacing the Old South Meeting house, which was the first town hall. The construction's design was created by Robert Peabody and John Stearns and looks like an Italian palace. Built of blocks of granite, the City Hall preserves the characteristics of the Renaissance Revival style: grand staircases, its cupola, the use of columns, harmonious and elegant forms. The facade is centered by a clock-tower. The City Hall is currently the 4th tallest building in Worcester.
Image Courtesy of Wikimedia and Pmeleski.
Sight description based on Wikipedia.
8

St. Paul's Cathedral opened its doors in 1896 and was originally started as a parish church. It is a Victorian Gothic styled structure, made of granite, with very distinctive features like a gabled roof, statues perched on its exterior walls and four-leaf rosettes. The construction was designed by Elbridge Boyden of Boston who is also the architect of some other notable buildings in Worcester. It is located on the corner of Chatham and High Streets.
Image Courtesy of Flickr and L.J. Allard.